Path to the Dark Side 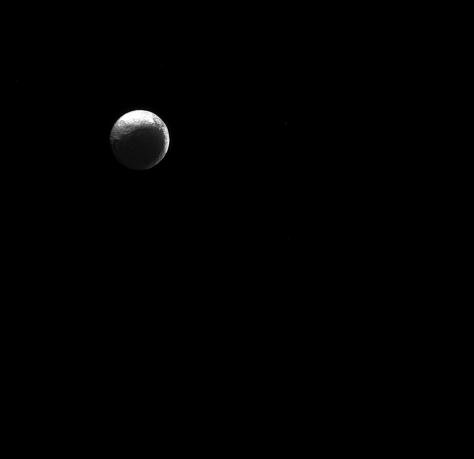 The moon Iapetus, like the "force" in Star Wars, has both a light side and a dark side.

Scientists think that Iapetus' (914 miles or 1471 kilometers across) dark/light asymmetry was actually created by material migrating away from the dark side. For a simulation of how scientists think the asymmetry formed, see Thermal Runaway Model .

Lit terrain seen here is on the Saturn-facing hemisphere of Iapetus. North on Iapetus is up and rotated 43 degrees to the right. The image was taken in green light with the Cassini spacecraft narrow-angle camera on Jan. 4, 2015.

The view was acquired at a distance of approximately 2.5 million miles (4 million kilometers) from Iapetus. Image scale is 15 miles (24 kilometers) per pixel.