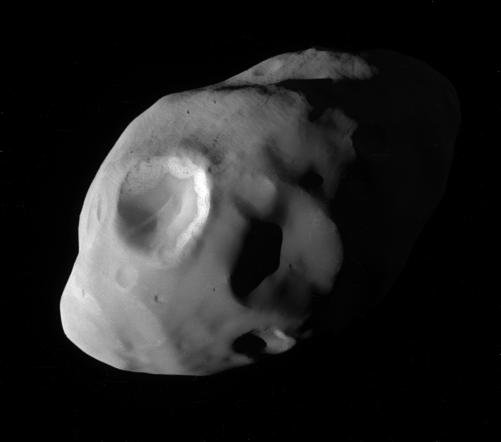 This image from NASA's Cassini spacecraft is one of the highest-resolution views ever taken of Saturn's moon Pandora. Pandora (52 miles, 84 kilometers) across orbits Saturn just outside the narrow F ring.

The spacecraft captured the image during its closest-ever flyby of Pandora on Dec. 18, 2016, during the third of its grazing passes by the outer edges of Saturn's main rings. (For Cassini's closest view prior to this flyby, see PIA07632, which is also in color.)

The image was taken in green light with the Cassini spacecraft narrow-angle camera at a distance of approximately 25,200 miles (40,500 kilometers) from Pandora. Image scale is 787 feet (240 meters) per pixel.

The Cassini-Huygens mission is a cooperative project of NASA, ESA (European Space Agency) and the Italian Space Agency. NASA's Jet Propulsion Laboratory, a division of Caltech in Pasadena, manages the mission for NASA's Science Mission Directorate, Washington. JPL designed, developed and assembled the Cassini orbiter. The Cassini imaging operations center is based at the Space Science Institute in Boulder, Colorado.