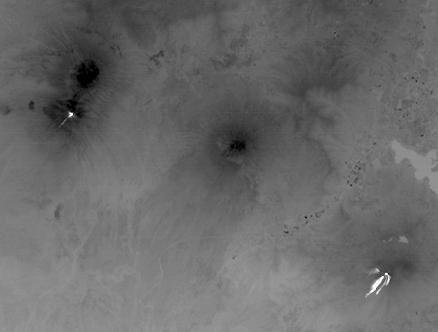 Two of Guatemala's active volcanoes, Fuego (upper left) and Pacaya (lower right) were erupting when the ASTER nighttime thermal infrared image was acquired on March 5, 2021. Pacaya's most recent eruption began Wednesday, with several lava flows and ash eruptions; surrounding villages were ordered evacuated. Since mid-February, Fuego continued to produce sporadic emissions of ash from its active central crater. In the ASTER image, the hottest areas are white, and coldest are black. The image covers an area of 29.8 by 40.3 km, and is centered at 14.4 degrees north, 90.8 degrees west.