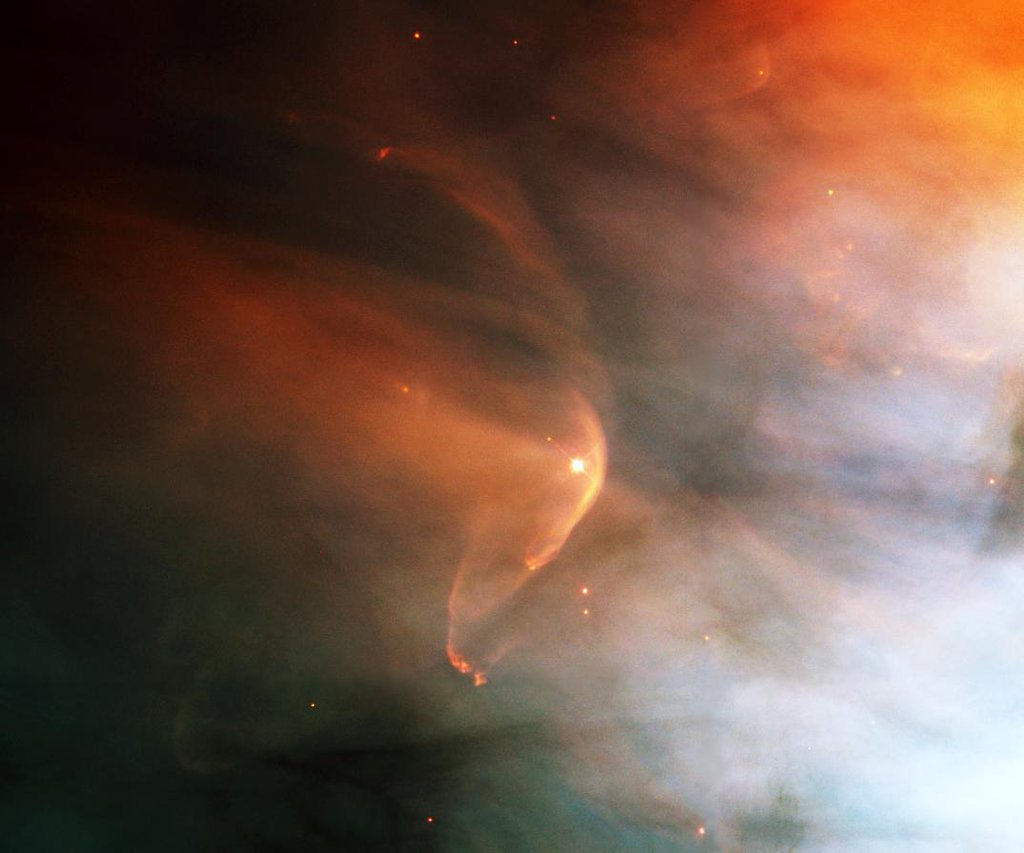 Astronomers using NASA's Hubble Space Telescope have found a bow shock around a very young star in the nearby Orion nebula, an intense star-forming region of gas and dust.

A picture, from the Hubble Heritage team, is available at http://hubblesite.org/newscenter/archive/releases/2002/05. It was taken in February 1995 as part of the Hubble Orion Nebula mosaic by Hubble's Wide Field and Planetary Camera 2, designed and built by NASA's Jet Propulsion Laboratory, Pasadena, Calif.

Named for the crescent-shaped wave a ship makes as it moves through water, a bow shock can form in space when two gas streams collide. In this case, the young star, LL Ori, emits a vigorous wind, a stream of charged particles moving rapidly outward from the star. Our own Sun has a less energetic version of this wind that is responsible for auroral displays on the Earth.

The material spewed from LL Ori collides with slow-moving gas evaporating away from the center of the Orion nebula, located to the lower right of the image. The surface where the two winds collide is seen as the crescent-shaped bow shock.

Unlike a water wave from a ship, this interstellar bow shock is three-dimensional. The filamentary emission has a distinct boundary on the side facing away from LL Ori, but is diffuse on the side closest to the star, a trait common to many bow shocks.

A second, fainter bow shock can be seen around a star near the upper right-hand corner of the image. Astronomers have identified numerous shock fronts in this complex star-forming region and are using this data to understand the complex phenomena associated with star birth.

The Orion nebula is a close neighbor in our Milky Way galaxy, at only 1,500 light-years from Earth. The filters used in this color composite represent oxygen, nitrogen, and hydrogen emissions.