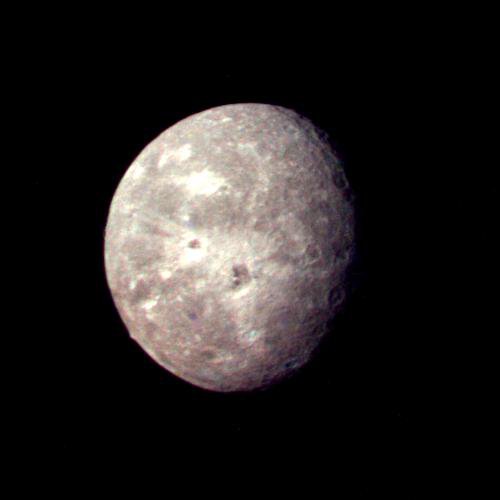 This Voyager 2 picture of Oberon is the best the spacecraft acquired of Uranus' outermost moon. The picture was taken shortly after 3:30 a.m. PST on Jan. 24, 1986, from a distance of 660,000 kilometers (410,000 miles). The color was reconstructed from images taken through the narrow-angle camera's violet, clear and green filters. The picture shows features as small as 12 km (7 mi) on the moon's surface. Clearly visible are several large impact craters in Oberon's icy surface surrounded by bright rays similar to those seen on Jupiter's moon Callisto. Quite prominent near the center of Oberon's disk is a large crater with a bright central peak and a floor partially covered with very dark material. This may be icy, carbon-rich material erupted onto the crater floor sometime after the crater formed. Another striking topographic feature is a large mountain, about 6 km (4 mi) high, peeking out on the lower left limb. The Voyager project is managed for NASA by the Jet Propulsion Laboratory.