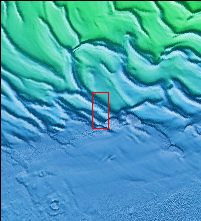 This VIS image shows the margin between the polar cap and the surrounding plains. There are dunes on the plains at the top of the image. In the upper left corner it can be seen that the dunes have been blown onto an extension of the ice. The rest of the image is dominated by the ice of the polar cap. The polar cap is formed of layers and layers of ice and dust formed over millions of years. The dust allows the layering to be easily visible.