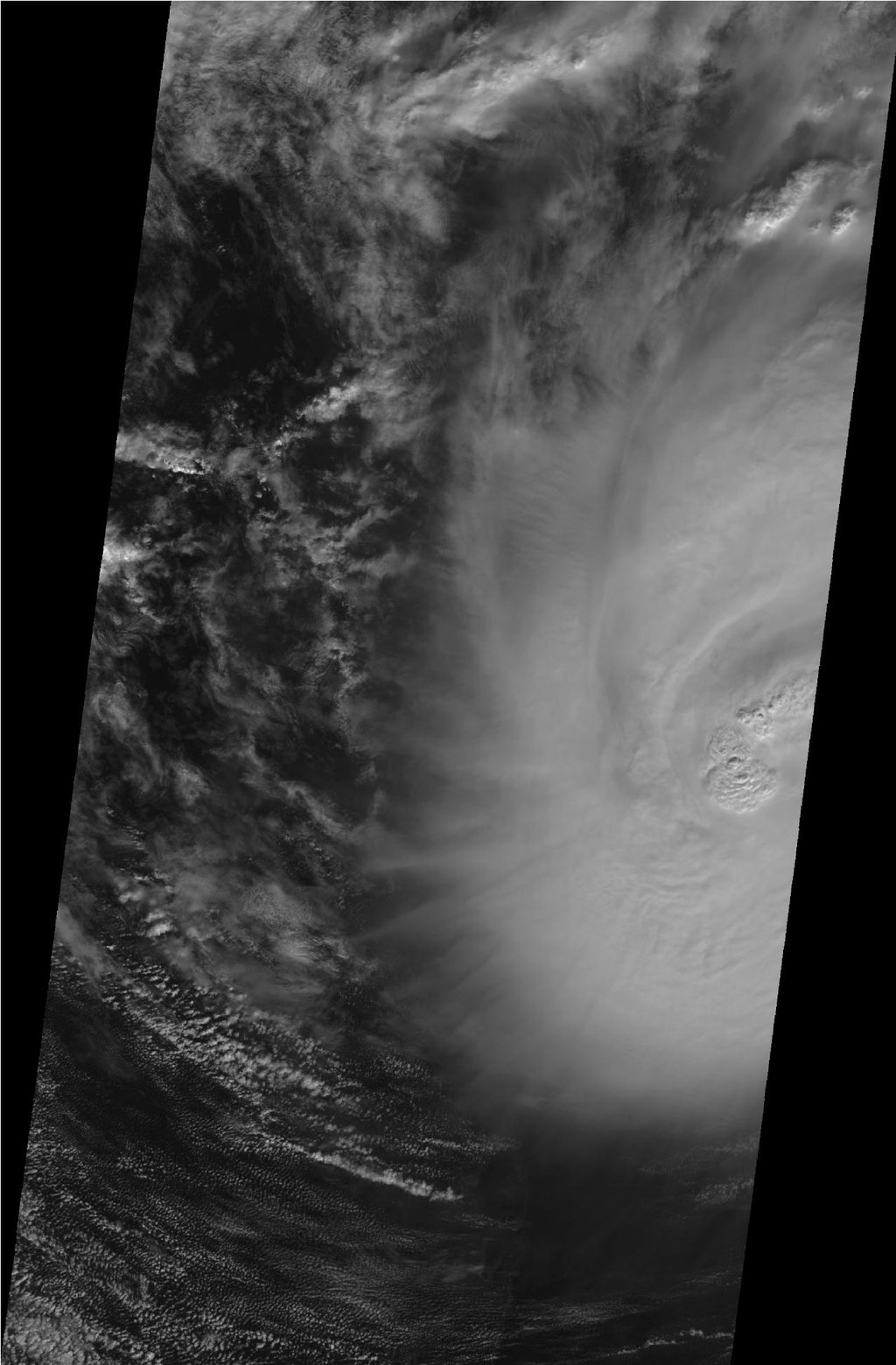 The first pair of images (figure 1) shows a visible image from MISR's nadir viewing camera, on the left, and a prototype retrieval of high-resolution (1.1 kilometers, or 0.7 miles) cross-track cloud motion heights and winds superimposed on this image on the right. The eye of Hurricane Ida is on the far right of the images and black regions indicate the extent of the MISR 380-kilometer-wide (236-mile-wide) image swath. North is toward the top of the images. The low clouds in the right image show the characteristic counterclockwise flow (from east to west for clouds north of the hurricane eye and the opposite to the south of the eye) associated with strong low pressure in the Northern Hemisphere. MISR uses a stereophotogrammetric technique to simultaneously retrieve the height and cross-track (east-west) motion of clouds. This technique relies on MISR's nine cameras that provide 275-meter (902-foot) resolution views of a single scene from different angles over a period of approximately seven minutes. An automatic pattern matching algorithm finds cloud top features that are common among the MISR camera images and determines the displacement of these features over time. Because the retrieval is purely geometric, the height assignment is very robust. For Hurricane Ida, the highest clouds are found at an altitude above 15 kilometers (9.3 miles) -- higher than a typical passenger aircraft flies. The prototype cross-track wind retrieval uses the time difference between different camera views to infer the motion of features orthogonal to the (north to south) motion of the satellite. The retrieval of both height and wind is done at a spatial resolution of 1.1 kilometers (0.7 miles). Observations of this type are extremely difficult to acquire from ground-based or airborne platforms.

The second set of images (figure 2) shows the detail of the clouds near the hurricane eye. At the time of the satellite overpass, Ida's eye was "closed," meaning that it was covered by clouds, so the typical dark eye caused by descending air in the center of the hurricane vortex is not visible. In this case, however, strong thunderstorms nearly reaching the stratosphere are visible as "bubbles." Upon reaching the stratosphere, the tops of thunderstorms rapidly spread out, as shown in the image on the right. The clouds to the west of the strongest storms are moving toward the west, while the clouds to the east are moving east. The speed this motion retrieved by MISR ranges from 10 to 30 meters per second (36 to 108 kilometers, or 22 to 67 miles, per hour).

The bubbling cloud tops observed by MISR are a relatively common feature of intensifying tropical storms, such as Hurricane Ida. They are associated with what are known as "vortical hot towers," which have been observed by other NASA satellite instruments, such as the Tropical Rainfall Measuring Mission (TRMM) that carries a precipitation radar that can look below the hurricane cloud tops. By rapidly bringing energy from the ocean surface up through the atmosphere, hot towers play an important, but not completely understood, role in storm intensification. The animation shows the development and spreading out of the clouds at the top of the hurricane over the seven-minute time period of the MISR instrument overpass. The spatial resolution of the images is 275 meters (902 feet) and the images are registered to the top of the hurricane to highlight the rapid development of the cloud features associated with the hot towers.