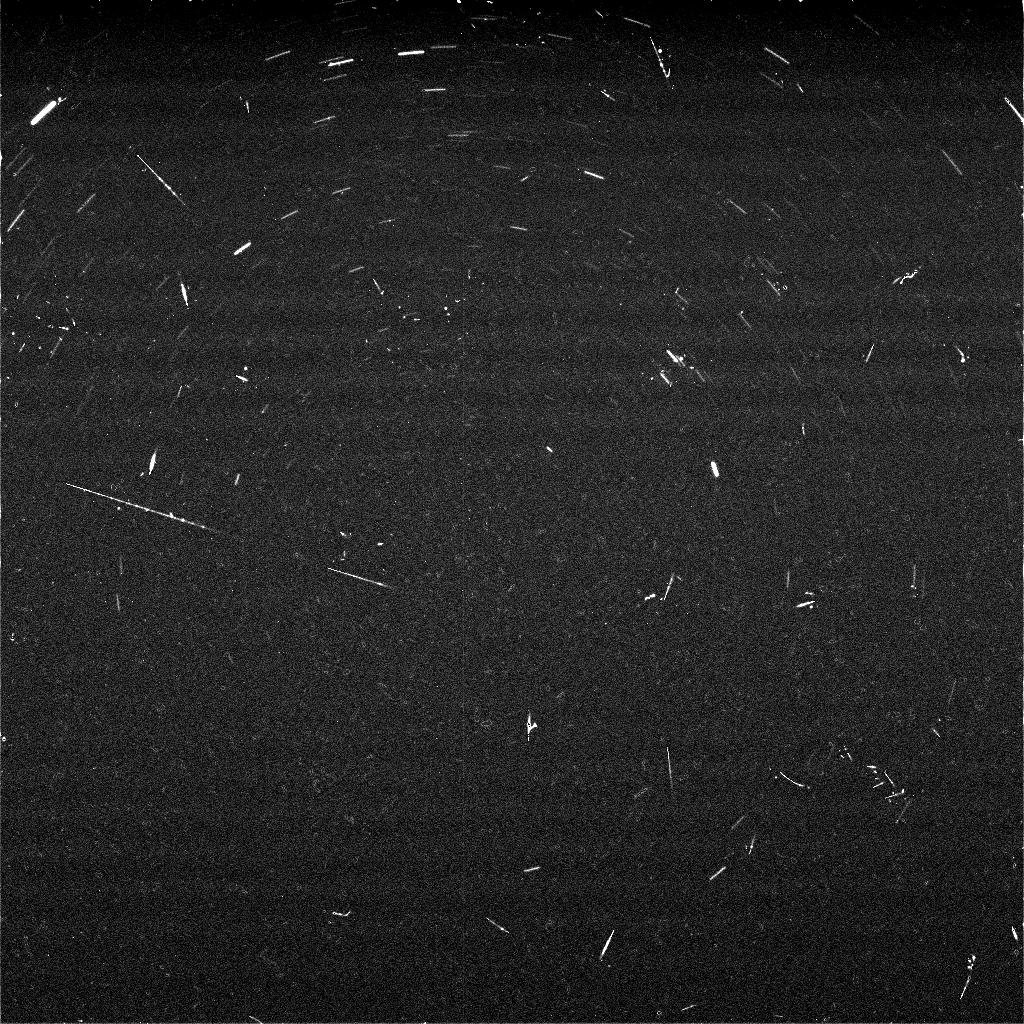 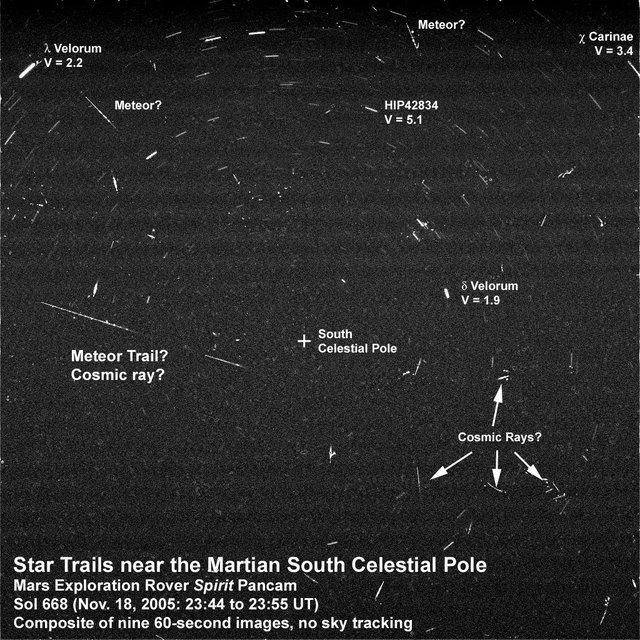 The panoramic cameras on NASA's Mars Exploration Rovers are about as sensitive as the human eye at night. The cameras can see the same bright stars that we can see from Earth, and the same patterns of constellations dot the night sky. Scientists on the rover team have been taking images of some of these bright stars as part of several different projects. One project is designed to try to capture "shooting stars," or meteors, in the martian night sky. "Meteoroids" are small pieces of comets and asteroids that travel through space and eventually run into a planet. On Earth, we can sometimes see meteoroids become brilliant, long "meteors" streaking across the night sky as they burn up from the friction in our atmosphere. Some of these meteors survive their fiery flight and land on the surface (or in the ocean) where, if found, they are called "meteorites." The same thing happens in the martian atmosphere, and Spirit even accidentally discovered a meteor while attempting to obtain images of Earth in the pre-dawn sky back in March, 2004 (see http://marsrovers.jpl.nasa.gov/gallery/press/spirit/20040311a.html, and Selsis et al. (2005) Nature, vol 435, p. 581). On Earth, some meteors come in "storms" or "showers" at predictable times of the year, like the famous Perseid meteor shower in August or the Leonid meteor shower in November. These "storms" happen when Earth passes through the same parts of space where comets sometimes pass. The meteors we see at these times are from leftover debris that was shed off of these comets.

The same kind of thing is predicted for Mars, as well. Inspired by calculations about Martian meteor storms by meteor scientists from the University of Western Ontario in Canada and the Centre de Recherche en Astrophysique de Lyon in France, and also aided by other meteor research colleagues from NASA's Marshall Space Flight Center, scientists on the rover team planned some observations to try to detect predicted meteor storms in October and November, 2005. The views shown here are a composite of nine 60-second exposures taken with the panoramic camera on Spirit during night hours of sol 668 (Nov. 18, 2005), during a week when Mars was predicted to pass through a meteor stream associated with Halley's comet. The south celestial pole is at the center of the frame. Many stars can be seen in the images, appearing as short, curved streaks forming arcs around the center point. The star trails are curved because Mars is rotating while the camera takes the images. The brightest stars in this view would be easily visible to the naked eye, but the faintest ones are slightly dimmer than the human eye can detect.

In addition to the star trails, there are several smaller linear streaks, dots and splotches that are the trails left by cosmic rays hitting the camera detectors. Cosmic rays are high-energy particles that are created in the Sun and in other stars throughout our galaxy and travel through space in all directions. Some of them strike Earth or other planets, and ones that strike a digital camera detector can leave little tracks or splotches like those seen in these images. Because they come from all directions, some strike the detector face-on, and others strike at glancing angles. Some even skip across the detector like flat rocks skipped across a pond. These are very common phenomena to astronomers used to working with sensitive digital cameras like those in the Mars rovers, the Hubble Space Telescope, or other space probes, and while they can be a nuisance when taking pictures, they generally do not cause any lasting damage to the cameras. Three of the streaks in the image, including one spanning most of the distance from the left edge of the frame to the center, might be meteor trails or could be the marks of other cosmic rays.

While hunting for meteors on Mars is fun, ultimately the team wants to use the images and results for scientific purposes. These include helping to validate the models and predictions for interplanetary meteor storms, providing information on the rate of impacts of small meteoroids with Mars for comparison with rates for the Earth and Moon, assessing the rate and intensity of cosmic ray impact events in the Martian environment, and looking at whether some bright stars are being dimmed occasionally by water ice or dust clouds occurring at night during different Martian seasons.