Measuring the Age of a Rock on Mars 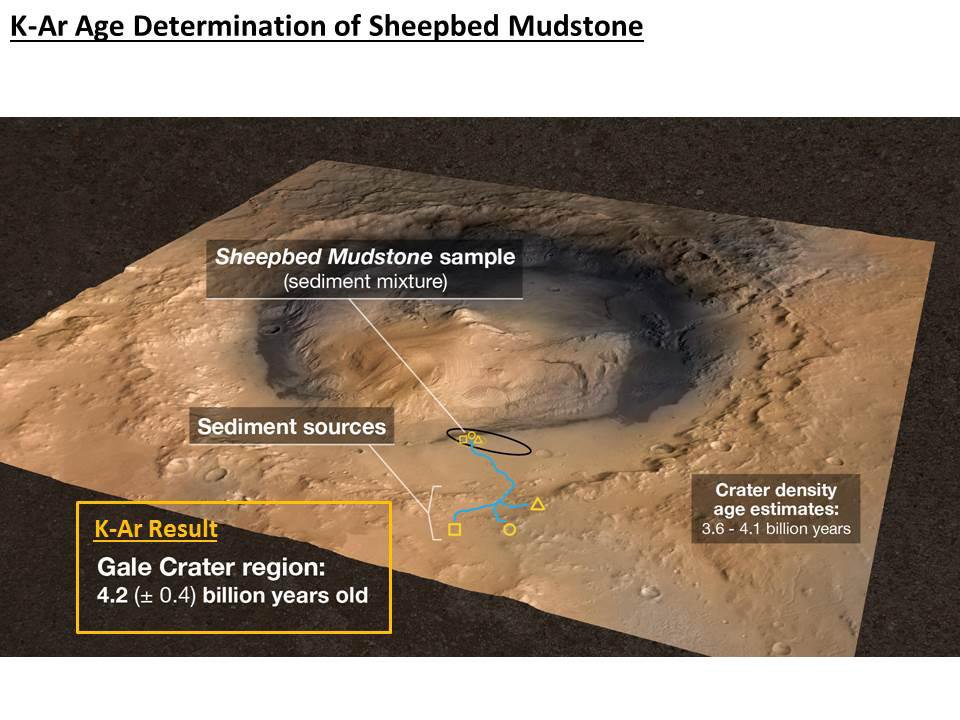 A rock in the Sheepbed mudstone deposit in the Yellowknife Bay area inside Gale Crater is the first rock on Mars ever to be dated by laboratory analysis of its ingredients. The analysis using measurements of the rock's potassium and argon content by NASA's Curiosity Mars rover yielded an estimate that it is 3.86 billion to 4.56 billion years old.

The mudstone is a sedimentary rock formed by particles that had started in rocks at higher elevations -- labelled on this image as "sediment sources" -- and washed downslope before being deposited at Yellowknife Bay.

The age measured for the rock is not the depositional age of the mudstone. Researchers calculate that it is a mixture of the ages of the mineral components delivered to the mudstone via stream transport from the crater rim and the highlands beyond, as indicated by the yellow symbols. Estimates of age based on the density of impact craters on different areas of Mars put the Gale impact and surrounding highlands in the range 3.6 billion to 4.1 billion years old, a good match to the new age estimate from laboratory analysis.

An unannotated version of the underlying image is available at PIA16475. This image combines elevation data from the High Resolution Stereo Camera on the European Space Agency's Mars Express orbiter, image data from the Context Camera on NASA's Mars Reconnaissance Orbiter, and color information from Viking Orbiter imagery.