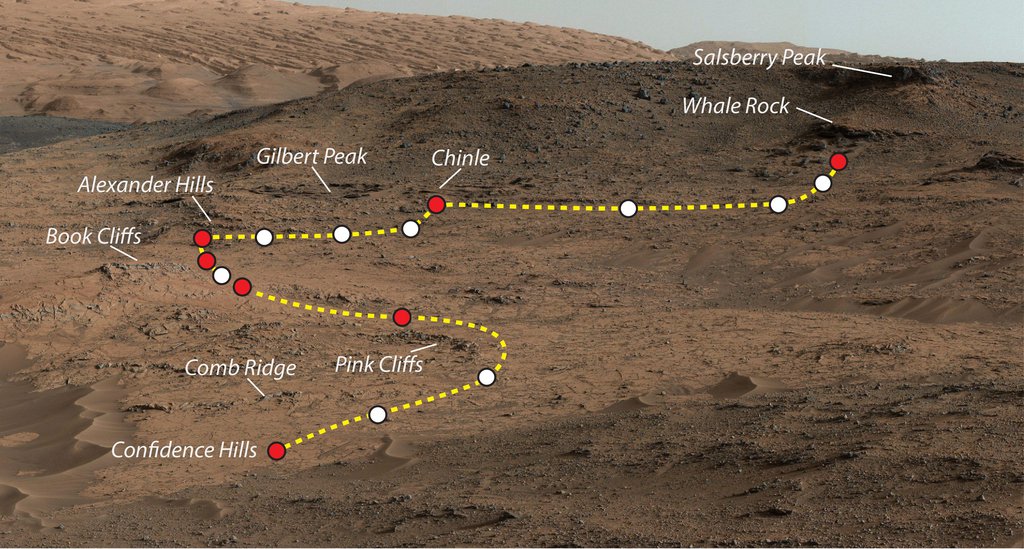 This view shows the path and some key places in a survey of the "Pahrump Hills" outcrop by NASA's Curiosity Mars rover in autumn of 2014. The outcrop is at the base of Mount Sharp within Gale Crater.

The mission's in-place investigation of the layered mountain began at the low edge of the Pahrump Hills outcrop, at the target "Confidence Hills." Curiosity collected a drilled sample of rock powder at that target in September 2014 and delivered portions of the powder into analytical instruments inside the rover. Then the mission began a "walkabout" of the outcrop, similar to the way field geologists on Earth walk across an outcrop to choose the best places on it to examine in detail. The dashed gold line indicates the path the rover drove during the walkabout. Names are shown for a few of the features visited and observed by the rover. Red dots indicate stops at the end of a day's drive. White dots indicate locations of stops made during the drives to collect observations of the Pahrump Hills outcrop. The mission completed the walkabout at the site labeled "Whale Rock," and the team is now examining the observations acquired during the walkabout to decide where to return for more detailed analysis.

This view of the outcrop and other portions of Mount Sharp beyond is a mosaic of images taken by the rover's Mast Camera (Mastcam). A larger version of the mosaic is at PIA18608.