Mars Has Ways to Make Organics Hard to Find 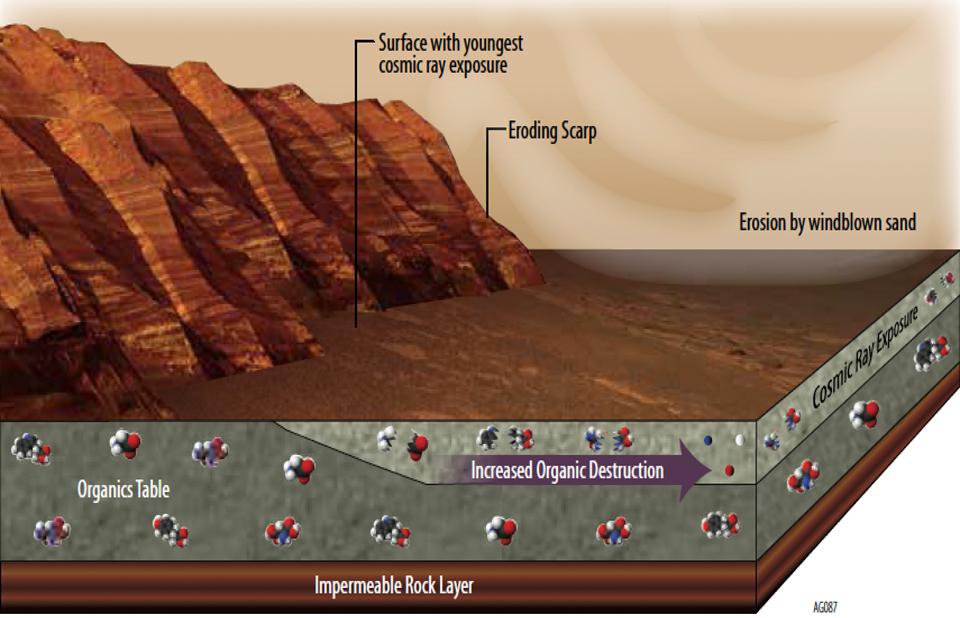 This illustration portrays some of the reasons why finding organic chemicals on Mars is challenging. Whatever organic chemicals may be produced on Mars or delivered to Mars face several possible modes of being transformed or destroyed.

Organic chemicals are molecular building block of life, although they can be made without the presence of life. Whether or not organic chemicals are produced by processes on Mars, some are delivered to the planet aboard meteorites and dust from asteroids and comets.

Cosmic rays that can penetrate rock surfaces can trigger breakdown of organic compounds. So can oxidation reactions induced by ultraviolet light, such as a process called Fenton's reaction, which breaks down organic chemicals in the presence of iron minerals and peroxide. Fenton's reaction is sometimes used for environmental cleanup projects where organic-chemical pollutants are a concern on Earth. Perchlorates in Martian soil and rock may also oxidize organic chemicals, directly converting them to carbon dioxide.

Despite the possible pathways for breakdown of organic chemicals on Mars, NASA's Curiosity Mars rover has definitively detected Martian organics in powder the rover's drill collected from a mudstone target called "Cumberland." That target is close to an eroding scarp, where it had been covered by overlying layers of rock, reducing exposure to cosmic rays, for most of the approximately three billion years since the rock formed.