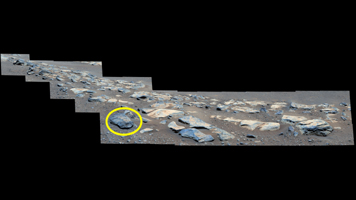 This mosaic image (composed of multiple individual images taken by NASA's Perseverance rover) shows a rock outcrop in the area nicknamed "Citadelle" on the floor of Mars' Jezero Crater. The mosaic image has been nicknamed "Malamaire" by the rover team and includes a block of rock called "Rochette" (after "La Rochette," a small town in north-central France whose name also translates to "little rock"). Perseverance successfully collected its first two rock samples from Rochette in early September 2021. An annotated version of this panorama shows the location of Rochette.

The images in the mosaic were taken by the Mastcam-Z instrument on the 180th sol (Martian day) of the rover's mission. One version (Figure 1) is presented in enhanced color to exaggerate the subtle red, green, and blue color differences among the materials in this scene. Another version (Figure 2) is presented in natural color to simulate the approximate view that we would see with our own eyes if we were there. Additional versions (Figures 3 and 4) combine images from the left and right Mastcam-Z cameras into anaglyphs (for red-blue glasses) that simulate a 3D view of the scene.