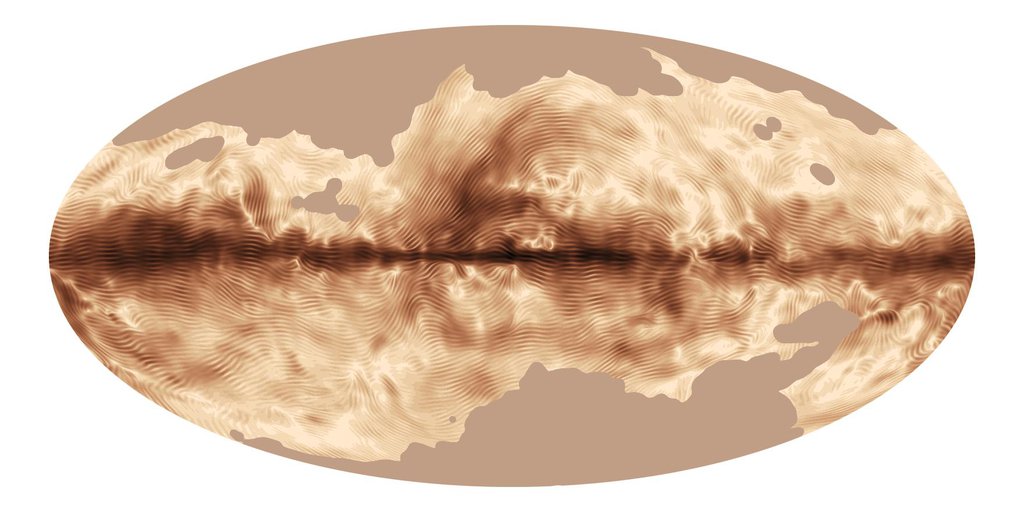 The magnetic field of our Milky Way galaxy as seen by the Planck satellite, a European Space Agency mission with significant NASA contributions. This image was compiled from the first all-sky observations of polarized light emitted by interstellar dust in the Milky Way. Light can become polarized when it is emitted by or scatters off dust and other surfaces; in this state, the electric and magnetic fields of individual light waves are aligned parallel to each other.

Darker regions correspond to stronger polarized emission, and the striations indicate the direction of the magnetic field projected on the plane of the sky. The dark band running horizontally across the center corresponds to the galactic plane. Here, the polarization reveals a regular pattern on large angular scales, which is due to the magnetic field lines being predominantly parallel to the plane of the Milky Way. The data also reveal variations of the polarization direction within nearby clouds of gas and dust. This can be seen in the tangled features above and below the plane, where the local magnetic field is particularly disorganized.

The magnetic field is displayed using a visualization technique called line integral convolution. The image is a Mollweide projection of the full celestial sphere, with the plane of the galaxy aligned with the horizontal axis of the oval. Certain areas in the image, mostly at high galactic latitude, have been masked out. The overall intensity in these regions is low, complicating the separation of foreground from cosmic microwave, and infrared, background components. Further data analysis will improve this by the time of the full data release in late 2014.