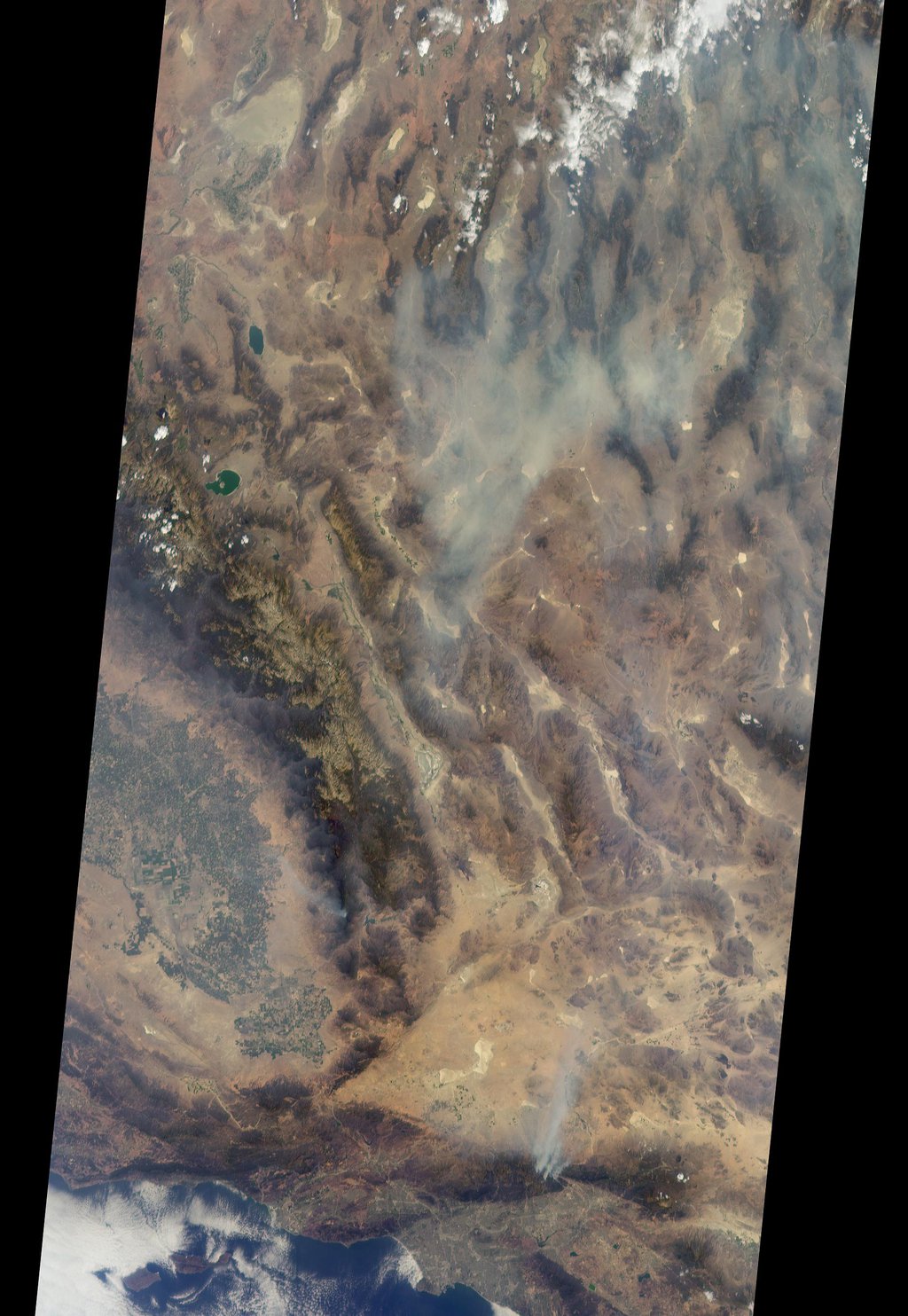 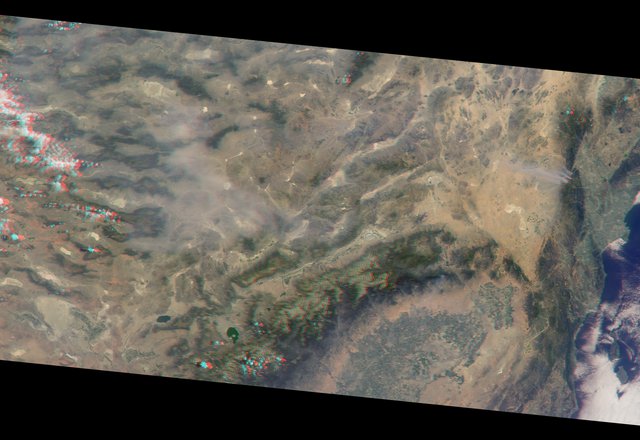 On Aug. 16, 2016, at around 10:30 a.m., a brush fire ignited in the Cajon Pass east of Los Angeles, just to the west of Interstate 15. Within a matter of hours, extreme temperatures, high winds and low humidity allowed the fire to spread rapidly, burning through brush left tinder-dry by years of drought. Firefighters quickly responded, ordering the evacuation of about 83,000 people in and around the Cajon Pass, Wrightwood, Lytle Creek, Oak Hills and surrounding areas. An as-yet uncounted number of homes and structures have burned, and Interstate 15 remains closed to downed power lines and barrier damage. By Aug. 17, the fire had expanded to more than 30,000 acres and remains zero percent contained as some 1,300 firefighters continue to battle to save homes and evacuate residents.

The Multi-angle Imaging SpectroRadiometer (MISR) instrument aboard NASA's Terra satellite passed over the region on Aug. 17 around 11:50 a.m. PDT and captured this natural-color image from MISR's 70-degree forward-viewing camera, which covers an areas about 257 miles (414 kilometers) wide. The oblique view angle makes the smoke more apparent than it would be in a more conventional vertical view. The Los Angeles metropolitan area is the large gray area on the coast in the center of the image. Three plumes from the Blue Cut Fire are clearly visible in the mountains to the north. This oblique view also shows an enormous cloud of smoke spreading northeastward over a significant portion of eastern California and Nevada. This smoke probably originated from the fire as it consumed almost 20,000 acres on the evening of the 16th and traveled north overnight.

Also visible from this oblique view is considerable haziness filling California's Central Valley, to the northwest of the Blue Cut Fire. This haziness is most likely due to smoke from several other fires burning in California, including the Soberanes Fire near Monterey, the Clayton Fire that has destroyed 175 structures north of San Francisco, the Chimney Fire and the Cedar Fire, which is visible in the image in the southern Sierra Nevada. The total number of acres burned in California this year has tripled in just the past week.

The 3D stereo anaglyph is made by combining data from MISR's 60-degree and 70-degree forward-viewing cameras. You will need red-blue glasses to view the 3D effect (ensure the red lens is over your left eye). In order to enable stereo viewing, the image has been rotated so north is to the left.

These data were acquired during Terra orbit 88648. Other MISR data are available through the NASA Langley Research Center; for more information go to http://eosweb.larc.nasa.gov/project/misr/misr_table. MISR was built and is managed by NASA's Jet Propulsion Laboratory, Pasadena, California, for NASA's Science Mission Directorate, Washington, D.C. The Terra spacecraft is managed by NASA's Goddard Space Flight Center, Greenbelt, Maryland. The MISR data were obtained from the NASA Langley Research Center Atmospheric Science Data Center, Hampton, Virginia. JPL is a division of the California Institute of Technology in Pasadena.