Life and Death in a Star-Forming Cloud 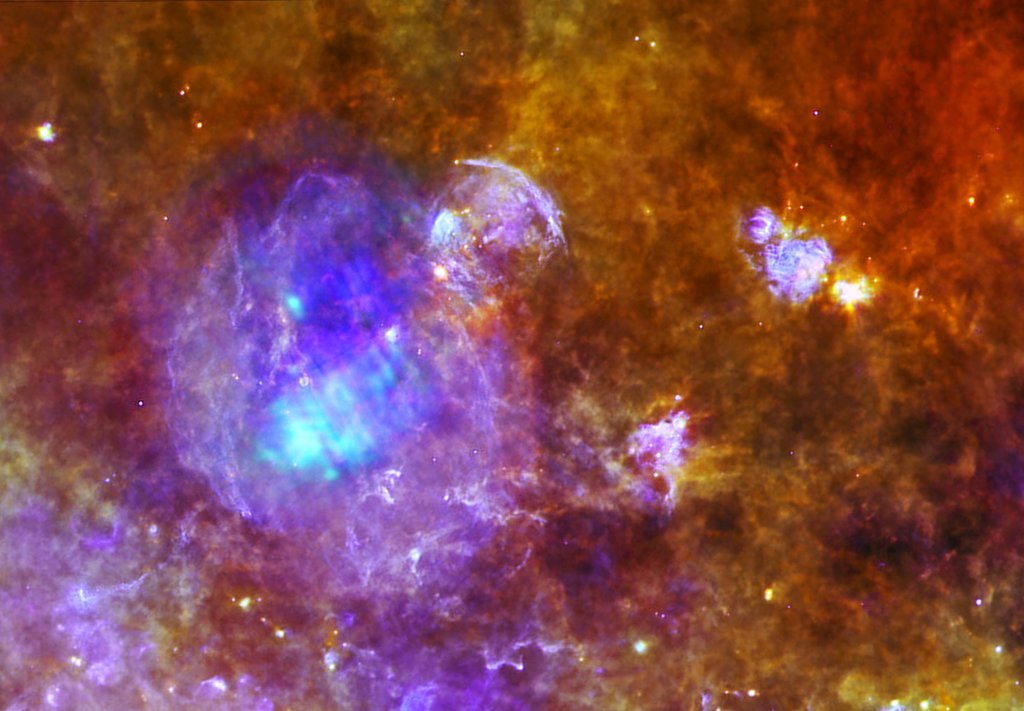 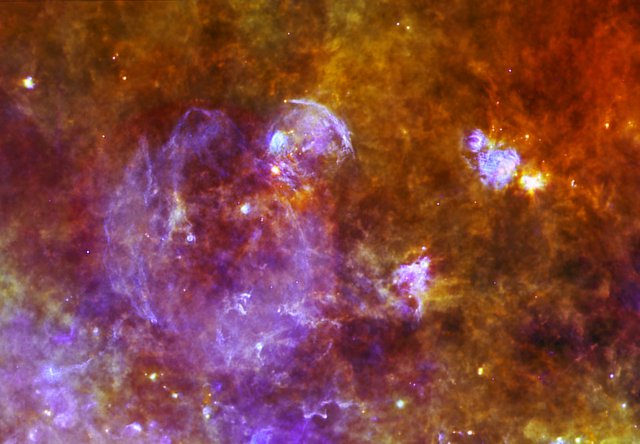 The aftershock of a stellar explosion rippling through space is captured in this new view of the supernova remnant called W44. The image combines longer-wavelength infrared and X-ray light captured by the European Space Agency's Herschel and XMM-Newton space observatories.

NASA also plays an important role in the Herschel mission, with the U.S project office based at the agency's Jet Propulsion Laboratory in Pasadena, Calif.

W44 is the vast purple sphere that dominates the left-hand side of this image, and measures about 100 light-years across.

W44 is located around 10,000 light-years away, within a forest of dense star-forming clouds in the constellation of Aquila, the Eagle. It is one of the best examples of a supernova remnant interacting with its parent cloud.

The supernova remnant is the result of massive star that reached the end of its life and expelled its outer layers in a dramatic explosion. All that remains of the stellar behemoth is the spinning core of a neutron star, or pulsar.

Identified as PSR B1853+01, the pulsar is the bright point to the top left in W44, colored light blue in this image. It is thought to be around 20,000 years old. Like other pulsars, as it rapidly rotates, it sweeps out a wind of highly energetic particles and beams of light ranging from radio to X-ray energies. The center of the supernova remnant is also bright in X-rays, coming from the hot gas that fills the shell at temperatures of several million degrees.

Dense knots of high-energy emission reflect regions where heavier elements are more commonly found. At the cooler edge of the cavity, gas is swept up as the supernova remnant propagates through space.

At the top right of the expanding shell, there is a smaller cavity, with the shock from the supernova remnant impacting the bight arc-shaped feature. This region is filled with hot gas that has been ionized by the intense ultraviolet radiation from embedded young massive stars.

Herschel's infrared eyes seek out regions of gently heated gas and dust further from W44, where new stars are congregating. Examples include the arrowhead-shaped star-formation region to the right of W44, which appears to point to another trio of intricate clouds further to the right and above.

X-ray data from XMM-Newton for W44 has been added in light and dark blue to represent high- and low-energy X-ray emission, respectively.

The field of view is about one-degree across. North is toward the bottom right of the image; east is to the top right.