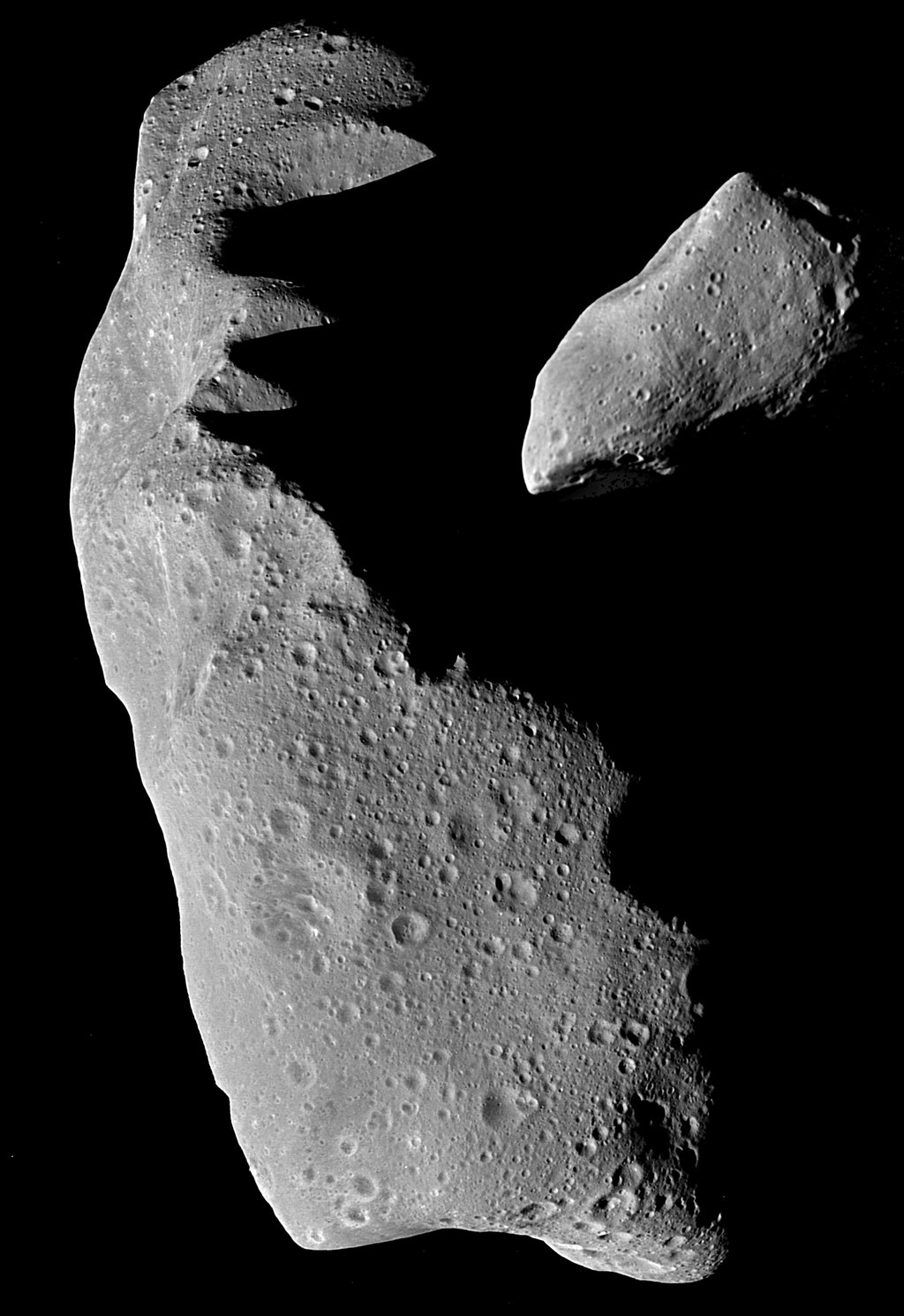 This picture shows the asteroids Ida (left) and Gaspra (right) to the same scale. These images were taken by the Galileo spacecraft while enroute to Jupiter. Gaspra was imaged on October 29, 1991 at a range of 3,300 miles (5,300 km). Ida was imaged on August 28, 1993 from a range of 1,900 to 2,400 miles (3,000 to 3,800 km). Both objects are irregular in shape. Gaspra is about 10.5 miles long (17 km), and Ida is 18.6 miles long and 6 to 8 miles wide (9.3 x 12.7 x 29.9 km). These asteroids are just two of the billions of such rocky and metallic objects that orbit the sun mainly between Mars and Jupiter. A small percentage orbit near the other planets. The irregular shapes of these objects suggests that they are "chips" derived from larger bodies by catastrophic collisions between asteroids. The surface of Ida and Gaspra are peppered by small craters, evidence of much smaller collisions. Craters are more abundant on Ida, thereby suggesting that it formed earlier than Gaspra. Both asteroids have linear depressions over a thousand feet wide in places and a hundred feet or so deep; these depressions may be where loose fragmental soil (the "regolith") has partly drained into fractures. These asteroids show evidence of having such a fragmental layer, which on Ida may be 165 to 330 feet (50 to 100 m deep). The fragmental debris layers on asteroids may one day prove invaluable to space miners, who may obtain asteroids everything from precious metals for use on Earth to water destined for use in space. Asteroids are also important to life on Earth because sometimes their orbits wander across Earth's and collisions ensue. About 2,000 asteroids larger than 0.6 miles across presently have orbits that cross or come close to Earth's orbit. Impacts with objects as large as Gaspra and Ida are very rare, but they have occurred in the past and are capable of causing mass extinctions of almost everything that lives on our planet. .