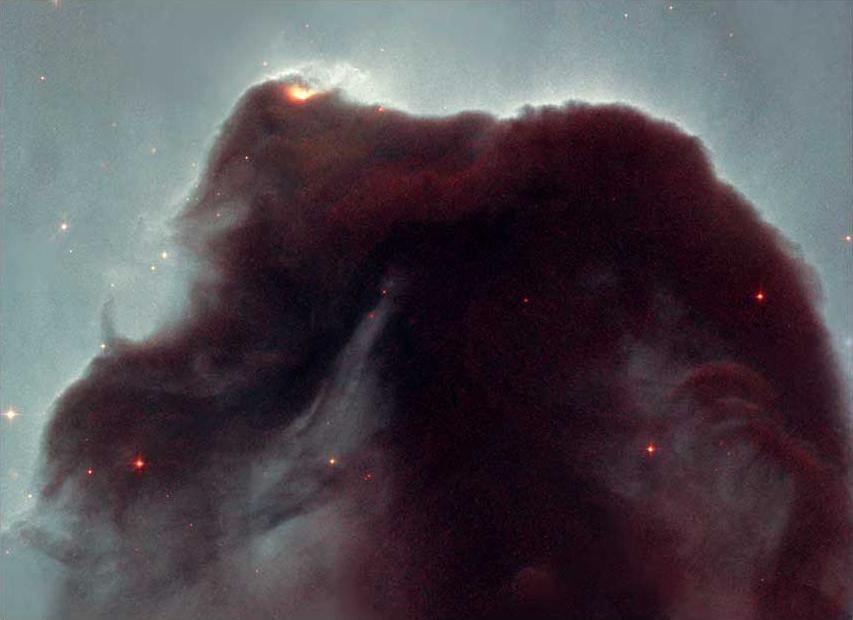 Rising from a sea of dust and gas like a giant seahorse, the Horsehead nebula is one of the most photographed objects in the sky. NASA's Hubble Space Telescope took a close-up look at this heavenly icon, revealing the cloud's intricate structure. This detailed view of the horse's head is being released to celebrate the orbiting observatory's eleventh anniversary. Produced by the Hubble Heritage Project, this picture is a testament to the Horsehead's popularity. Internet voters selected this object for the orbiting telescope to view. The image can be view at http://hubblesite.org/newscenter/archive/releases/2001/12/image/a/.

The Horsehead, also known as Barnard 33, is a cold, dark cloud of gas and dust, silhouetted against the bright nebula, IC 434. The bright area at the top left edge is a young star still embedded in its nursery of gas and dust. But radiation from this hot star is eroding the stellar nursery. The top of the nebula also is being sculpted by radiation from a massive star located out of Hubble's field of view.

Only by chance does the nebula roughly resemble the head of a horse. Its unusual shape was first discovered on a photographic plate in the late 1800s. Located in the constellation Orion, the Horsehead is a cousin of the famous pillars of dust and gas known as the Eagle nebula. Both tower-like nebulas are cocoons of young stars.

The Horsehead nebula lies just south of the bright star Zeta Orionis, which is easily visible to the unaided eye as the left-hand star in the line of three that form Orion's Belt. Amateur astronomers often use the Horsehead as a test of their observing skills; it is known as one of the more difficult objects to see visually in an amateur-sized telescope.

The magnificent extent of the Horsehead is best appreciated in a new wide-field image of the nebula being released today by the National Optical Astronomy Observatory, taken by Travis Rector with the National Science Foundation's 0.9 meter telescope at Kitt Peak National Observatory near Tucson, AZ.

This popular celestial target was the clear winner among more than 5,000 Internet voters, who were asked last year to select an astronomical target for the Hubble telescope to observe. The voters included students, teachers, and professional and amateur astronomers.

This 11th anniversary release image was composed by the Hubble Heritage Team, which superimposed Hubble data onto ground-based data (limited to small triangular regions around the outer edge of the image). Ground-based image courtesy of Nigel A. Sharp (NOAO/AURA/NSF) taken at the 0.9-meter telescope on Kitt Peak.