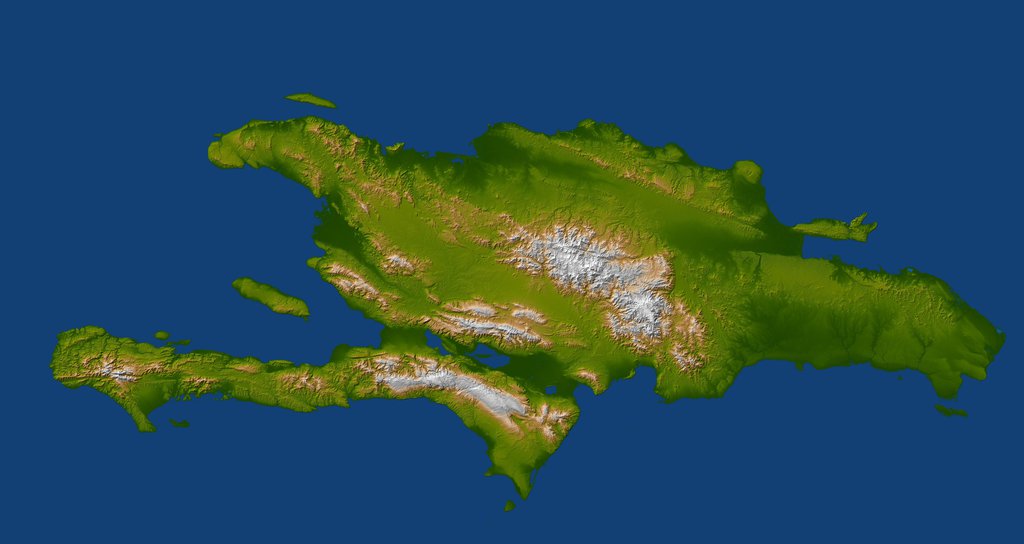 A magnitude 7.0 earthquake occurred on January 12, 2010, at Port-au-Prince, Haiti, with major impact to the region and its citizens. Haiti (on the west) and the Dominican Republic (on the east) share the island of Hispaniola. Port-au-Prince is located at the east end of the northern shore of Haiti's southern peninsula. This view of the topography of the island shows the fault apparently responsible for the earthquake as a prominent linear landform immediately southwest of the city and as a series of fault traces that extend westward along the full length of the southern peninsula. This fault was already well known and is called the Enriquillo fault.

The Enriquillo fault generally moves left-laterally (horizontally, with features across the fault shifting to the left when the fault breaks in an earthquake), but vertical movements occur along the fault where irregularities in the fault line cause local compression or extension of the earth. Meanwhile, movements of the topography at the Earth's surface can falsely appear to be vertical where mountain slopes are cut and misaligned by horizontal shifts of the fault. Additionally, differing erosion rates on the two sides of the fault, due to the juxtapositioning of differing rock types by the fault, can give the appearance of vertical offsets of the current topographic surface. All of these real and apparent horizontal and vertical offsets of the topographic surface may (and likely do) occur here, making the fault easily observed in the topographic data.

The elevation data used in this image were produced by the Shuttle Radar Topography Mission (SRTM), flown aboard Space Shuttle Endeavour in February 2000. SRTM acquired elevation measurements for nearly all of Earth's landmass between 60 degrees North and 56 degrees South latitudes. For many areas of the world, SRTM data provide the first detailed three-dimensional observation of landforms at regional scales. The mission was a cooperative project between the National Aeronautics and Space Administration (NASA), the National Geospatial-Intelligence Agency (NGA) of the U.S. Department of Defense (DOD), and the German and Italian space agencies. It was managed by NASA's Jet Propulsion Laboratory, Pasadena, Calif., for NASA's Science Mission Directorate, Washington, D.C.