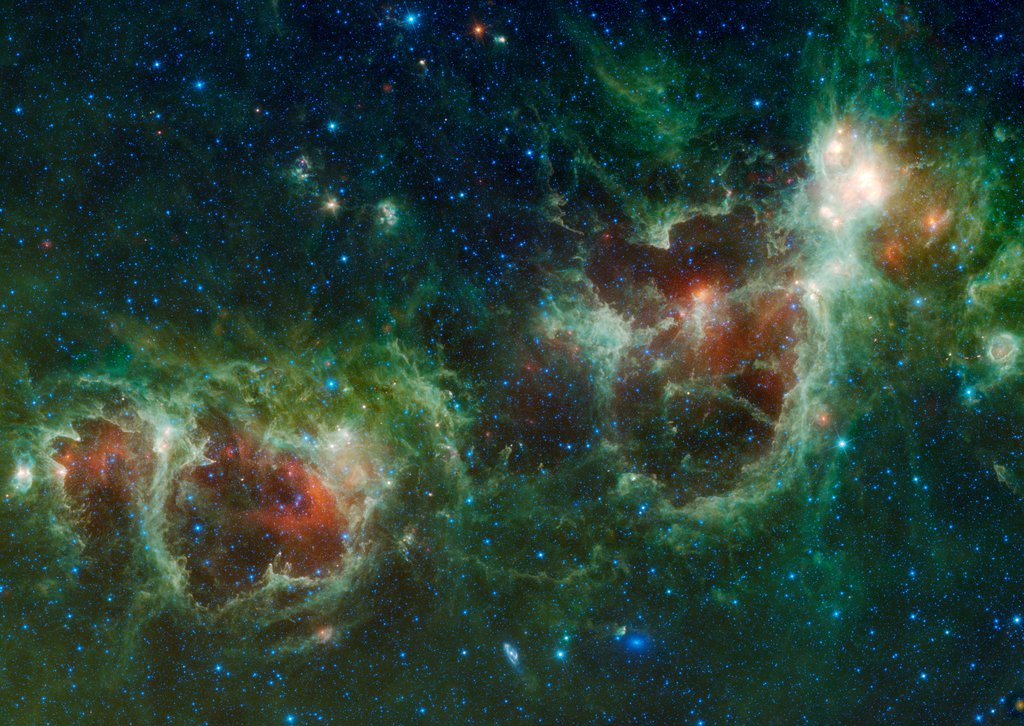 The Heart and Soul nebulae are seen in this infrared mosaic from NASA's Wide-field Infrared Survey Explorer, or WISE. The image covers an area of the sky over ten times as wide as the full moon and eight times as high (5.5 x 3.9 degrees) in the constellation Cassiopeia.

Located about 6,000 light-years from Earth, the Heart and Soul nebulae form a vast star-forming complex that makes up part of the Perseus spiral arm of our Milky Way galaxy. The nebula to the right is the Heart, designated IC 1805 and named after its resemblance to a human heart. To the left is the Soul nebula, also known as the Embryo nebula, IC 1848 or W5. The Perseus arm lies further from the center of the Milky Way than the arm that contains our sun. The Heart and Soul nebulae stretch out nearly 580 light-years across, covering a small portion of the diameter of the Milky Way, which is roughly 100,000 light-years across.

The two nebulae are both massive star-making factories, marked by giant bubbles that were blown into surrounding dust by radiation and winds from the stars. WISE's infrared vision allows it to see into the cooler and dustier crevices of clouds like these, where gas and dust are just beginning to collect into new stars. These stars are less than a few million of years old -- youngsters in comparison to stars like the sun, which is nearly 5 billion years old.

Also visible near the bottom of this image are two galaxies, Maffei 1 and Maffei 2. Both galaxies contain billions of stars and, at about 10 million light-years away, are well outside our Milky Way yet relatively close compared to most galaxies. Maffei 1 is the bluish elliptical object and Maffei 2 is the spiral galaxy.

WISE is an all-sky survey, snapping pictures of the whole sky, including everything from asteroids to stars to powerful, distant galaxies.