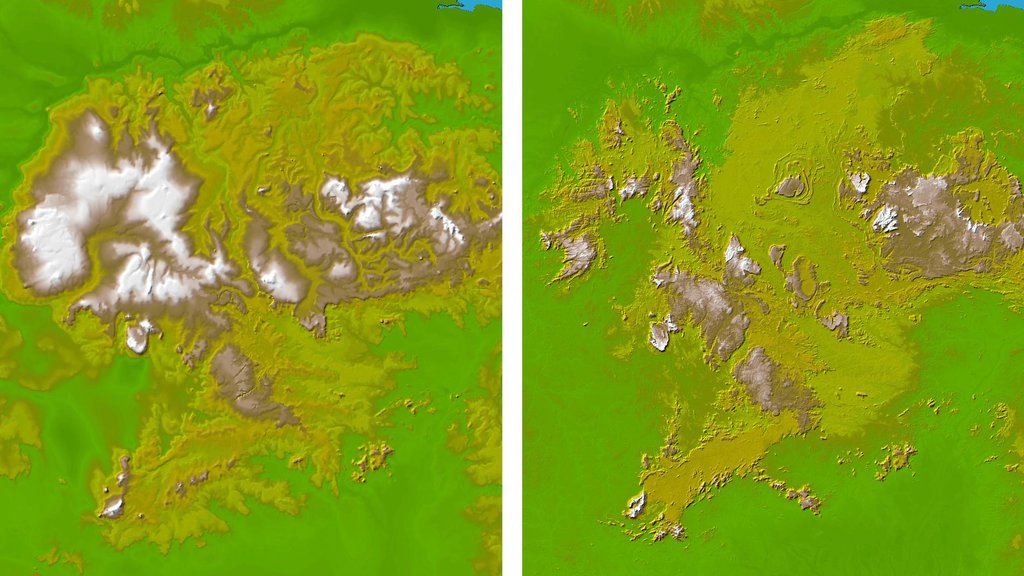 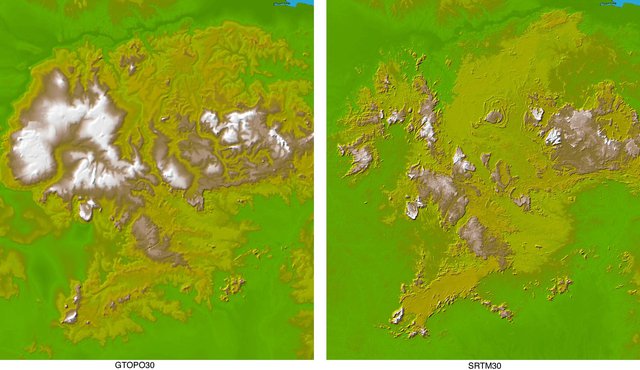 These two images show exactly the same area in South America, the Guiana Highlands straddling the borders of Venezuela, Guyana and Brazil. The image on the left was created using the best global topographic data set previously available, the U.S. Geological Survey's GTOPO30. In contrast, the image on the right was generated with a new data set recently released by the Shuttle Radar Topography Mission (SRTM) called SRTM30, which represents a significant improvement in our knowledge of the topography of much of the world.

GTOPO30, with a resolution of about 928 meters (1496 feet), was developed over a three-year period and published in 1996, and since then has been the primary source of digital elevation data for scientists and analysts involved in global studies. However, since it was compiled from a number of different map sources with varying attributes, the data for some parts of the globe were inconsistent or of low quality.

The SRTM data, on the other hand, were collected within a ten-day period using the same instrument in a uniform fashion, and were processed into elevation data using consistent processing techniques. Thus SRTM30 provides a new resource of uniform quality for all parts of the Earth, and since the data, which have an intrinsic resolution of about 30 meters, were averaged and resampled to match the GTOPO30 sample spacing and format, and can be used by the same computer software without modification.

The Guiana Highlands are part of the Guyana Shield, which lies in northeast South America and represent one of the oldest land surfaces in the world. Chemical weathering over many millions of years has created a landscape of flat-topped table mountains with dramatic, steep cliffs with a large number of spectacular waterfalls. For example Angel Falls, at 979 meters the highest waterfall in the world, plunges from Auyan Tebuy, part of a mesa of the type that may have been the inspiration for Arthur Conan Doyle's 1912 best-seller "The Lost World."

Elevation data used in this image were acquired by the Shuttle Radar Topography Mission aboard the Space Shuttle Endeavour, launched on Feb. 11, 2000. SRTM used the same radar instrument that comprised the Spaceborne Imaging Radar-C/X-Band Synthetic Aperture Radar (SIR-C/X-SAR) that flew twice on the Space Shuttle Endeavour in 1994. SRTM was designed to collect 3-D measurements of the Earth's surface. To collect the 3-D data, engineers added a 60-meter (approximately 200-foot) mast, installed additional C-band and X-band antennas, and improved tracking and navigation devices. The mission is a cooperative project between NASA, the National Imagery and Mapping Agency (NIMA) of the U.S. Department of Defense and the German and Italian space agencies. It is managed by NASA's Jet Propulsion Laboratory, Pasadena, Calif., for NASA's Earth Science Enterprise,Washington, D.C.