Global View of the Arctic Ocean 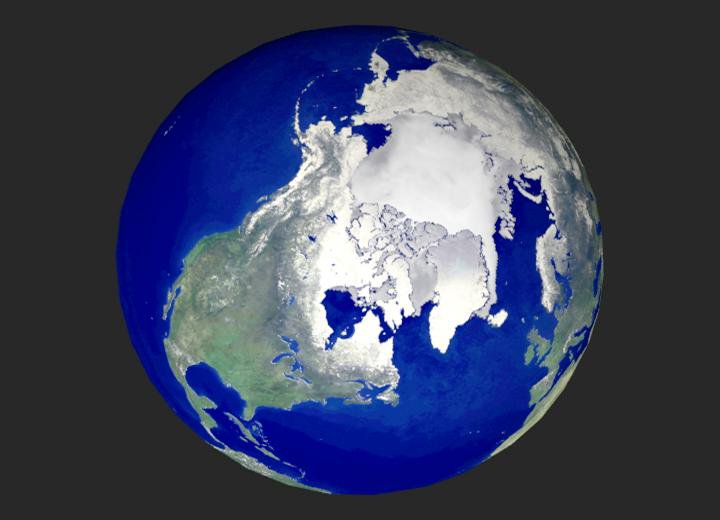 NASA researchers have new [sic] insights into the mysteries of Arctic sea ice, thanks to the unique abilities of Canada's Radarsat satellite. The Arctic is the smallest of the world's four oceans, but it may play a large role in helping scientists monitor Earth's climate shifts.

Using Radarsat's special sensors to take images at night and to peer through clouds, NASA researchers can now see the complete ice cover of the Arctic. This allows tracking of any shifts and changes, in unprecedented detail, over the course of an entire winter. The radar-generated, high-resolution images are up to 100 times better than those taken by previous satellites.

Using this new information, scientists at NASA's Jet Propulsion Laboratory (JPL), Pasadena, Calif., can generate comprehensive maps of Arctic sea ice thickness for the first time. "Before we knew only the extent of the ice cover," said Dr. Ronald Kwok, JPL principal investigator of a project called Sea Ice Thickness Derived From High Resolution Radar Imagery. "We also knew that the sea ice extent had decreased over the last 20 years, but we knew very little about ice thickness."

"Since sea ice is very thin, about 3 meters (10 feet) or less,"Kwok explained, "it is very sensitive to climate change."

Until now, observations of polar sea ice thickness have been available for specific areas, but not for the entire polar region.

The new [sic] radar mapping technique has also given scientists a close look at how the sea ice cover grows and contorts over time. "Using this new data set, we have the first estimates of how much ice has been produced and where it formed during the winter. We have never been able to do this before, " said Kwok. "Through our radar maps of the Arctic Ocean, we can actually see ice breaking apart and thin ice growth in the new openings. "

RADARSAT gives researchers a piece of the overall puzzle every three days by creating a complete image of the Arctic. NASA scientists then put those puzzle pieces together to create a time-lapsed view of this remote and inhospitable region. So far, they have processed one season's worth of images.

"We can see large cracks in the ice cover, where most ice grows, " said Kwok. "These cracks are much longer than previously thought, some as long as 2,000 kilometers (1,200 miles)," Kwok continued. "If the ice is thinning due to warming, we'll expect to see more of these long cracks over the Arctic Ocean. "

Scientists believe this is one of the most significant breakthroughs in the last two decades of ice research. "We are now in a position to better understand the sea ice cover and the role of the Arctic Ocean in global climate change, " said Kwok.

Radar can see through clouds and any kind of weather system, day or night, and as the Arctic regions are usually cloud-covered and subject to long, dark winters, radar is proving to be extremely useful. However, compiling these data into extremely detailed pictures of the Arctic is a challenging task.

"This is truly a major innovation in terms of the quantities of data being processed and the novelty of the methods being used, " said Verne Kaupp, director of the Alaska SAR Facility at the University of Alaska, Fairbanks.

The mission is a joint project between JPL, the Alaska SAR Facility, and the Canadian Space Agency. Launched by NASA in 1995, the Radarsat satellite is operated by the Canadian Space Agency. JPL manages the Sea Ice Thickness Derived From High Resolution Radar Imagery project for NASA's Earth Science Enterprise, Washington, DC. The Earth Science Enterprise is dedicated to studying how natural and human-induced changes affect our global environment.