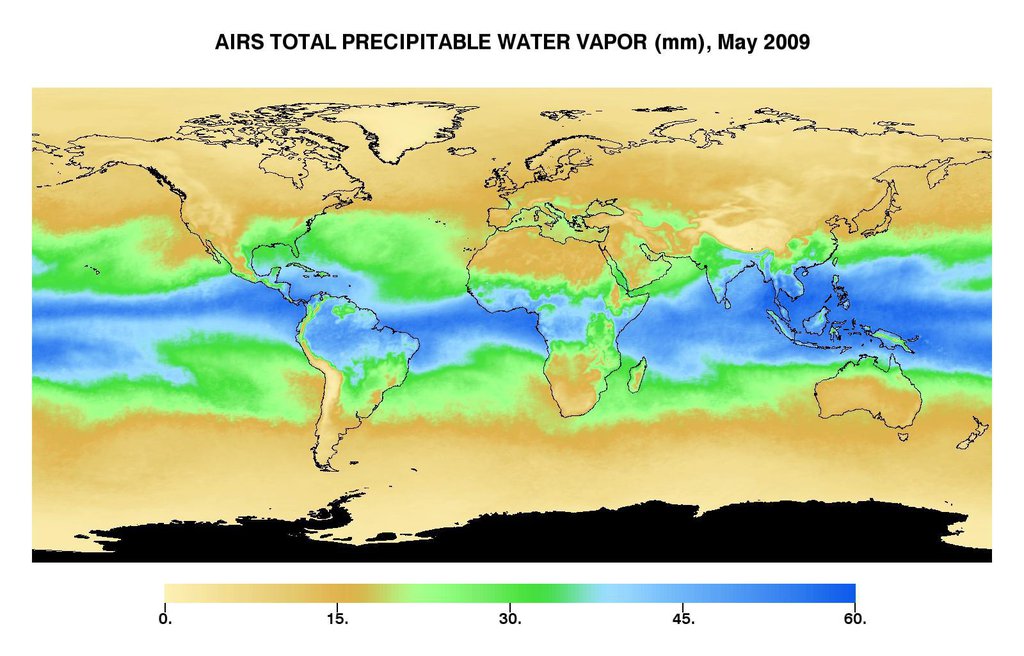 This image represents the total precipitable water vapor for May, 2009 as observed by AIRS, the Atmospheric Infrared Sounder (AIRS) on NASA's Aqua satellite. It shows the total amount of water vapor present in the atmospheric column above each point of the Earth's surface. If all the water vapor in the column were forced to fall as rain, the depth of the resulting puddle on the surface at that point is equal to the value shown on the map. Fifty millimeters is about 2 inches. The water vapor measured above the Antarctic is not shown (black color), since the elevation there is generally very high and the water vapor content extremely low—so low that the color scale would have to be "stretched" to show any details, which would reduce the details for the rest of the globe.

The large area of maximum water vapor in the neighborhood of the equator is the Intertropical Convergence Zone or ITCZ, a region of strong convection and powerful thunderstorms. It is particularly intense in a region around the Philippines and Indonesia called the warm pool. The air's ability to contain moisture Is related to its temperature—the higher the air temperature, the more moisture can be contained before it must condense and fall out as rain. This image confirms that, as one would expect, the greatest amounts of moisture occur in the tropics. At extremely cold temperatures the atmosphere can hold very little water vapor, which is reflected by the strong correspondence between light brown dry areas of this map and cold areas in temperature maps. Very low precipitable water vapor occurs because the air is dry, such as over deserts. But because of the temperature relationship, most of the "column water vapor" is contained in the lowest portion of the atmosphere, and when a high mountain makes it impossible to measure down to sea level, the total is much smaller. Mountain regions therefore appear to be abnormally dry. That is sometimes true but not always - sometimes it just reflects the fact that the "measurement column" has been cut off by the mountain.