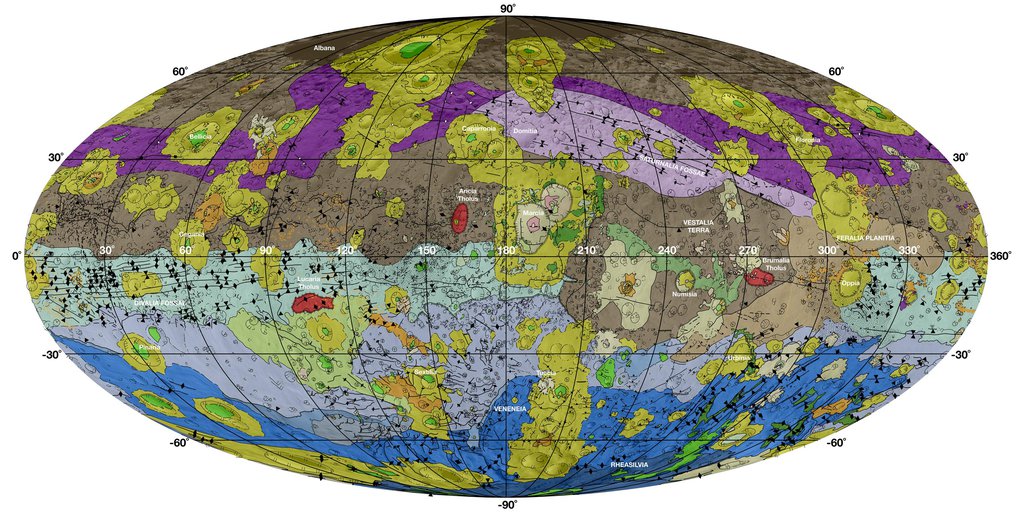 This high-resolution geological map of Vesta is derived from Dawn spacecraft data. Brown colors represent the oldest, most heavily cratered surface. Purple colors in the north and light blue represent terrains modified by the Veneneia and Rheasilvia impacts, respectively. Light purples and dark blue colors below the equator represent the interior of the Rheasilvia and Veneneia basins. Greens and yellows represent relatively young landslides or other downhill movement and crater impact materials, respectively. This map unifies 15 individual quadrangle maps published this week in a special issue of Icarus. Map is a Mollweide projection, centered on 180 degrees longitude using the Dawn Claudia coordinate system.

The legend shows formations and features highlighted on the map. The geological units mapped on Vesta are identified by their appearance in high-resolution images. The place of each unit in Vesta's geologic history comes from careful study of the relative relationship of features. In the legend, Marcian units are younger than Rheasilvian units, which are younger than Veneneian units. The oldest identifiable unit is Vestalia Terra.