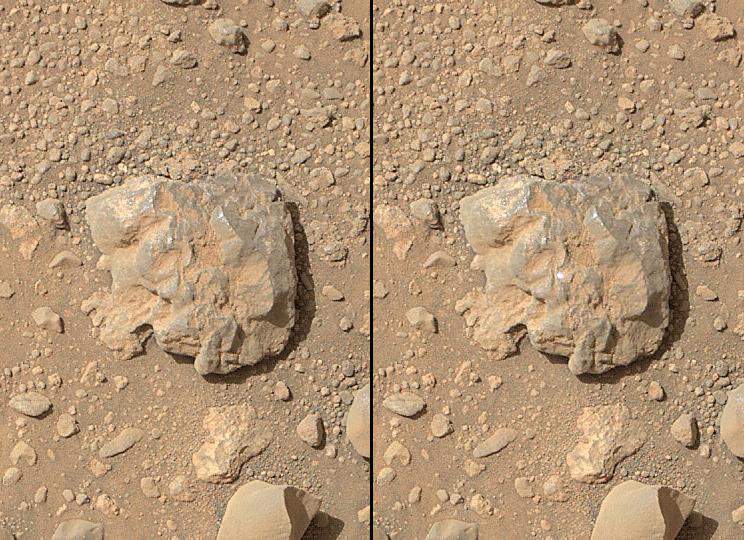 NASA's Curiosity Mars rover used the Mars Hand Lens Imager (MAHLI) camera on its arm to catch the first images of sparks produced by the rover's laser being shot at a rock on Mars. The left image is from before the laser zapped this rock, called "Nova." The bright spot at the center of the right image is the spark. The rock is about the size of a baseball.

The laser is fired by Curiosity's Chemistry and Camera (ChemCam) instrument. ChemCam also includes spectrometers to examine intensities of light at different wavelengths in sparks that the laser shots induce at the target. The spectrometer data inform researchers about which chemical elements are in the target.

In the first two years since Curiosity landed in Mars' Gale Crater in August 2012, ChemCam has used its laser on more than 600 rock or soil targets, firing more than 150,000 laser shots. The examination of the target rock Nova was the first during which MAHLI took images of the sparks generated by the laser shots. ChemCam fired 100 laser shots at Nova during the 687th Martian day, or sol, of Curiosity's work on Mars (July 12, 2014). MAHLI, snapping exposures at nearly five times per second during this series of laser shots, captured several of the resulting sparks, including the one in the image on the right. A video made from the series of MAHLI images is online at http://www.jpl.nasa.gov/video/?id=1317.

ChemCam found Nova to be rich in silicon, aluminum and sodium. An image of the target from ChemCam's Remote Micro-Imager is PIA18388, along with a sampling of spectrometer data from the examination.