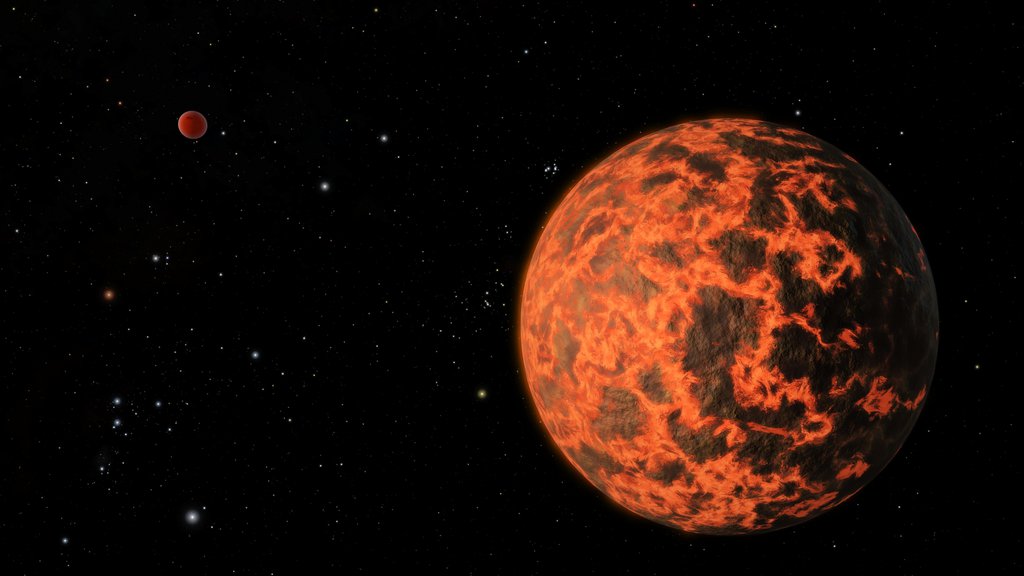 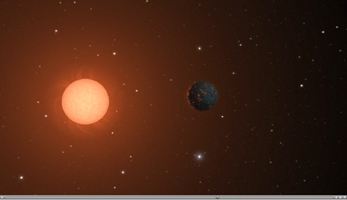 Astronomers using NASA's Spitzer Space Telescope have detected what they believe is an alien world just two-thirds the size of Earth -- one of the smallest on record. The exoplanet candidate, known as UCF-1.01, orbits a star called GJ 436, which is located a mere 33 light-years away. UCF-1.01 might be the nearest world to our solar system that is smaller than our home planet.

Although probably rocky in composition like Earth, UCF-1.01 would be a terrible place for life. The world orbits scorchingly close to its star, so in all likelihood this planet lacks an atmosphere and might even have a molten surface, as shown in this artist's impression.

Evidence for UCF-1.01 turned up when astronomers were studying a known, Neptune-sized exoplanet, called GJ 436b, seen in the background in this image. The identification of nearby small planets may lead to their characterization using future instruments. In this way, worlds like UCF-1.01 might serve as stepping stones to one day finding a habitable, Earth-like exoplanet.

Because of GJ 436's proximity to our solar system, the star field around it shares many of our culture's famous cosmic landmarks. To the far left, the constellation of Orion gleams, though in a distorted shape compared to our vantage point on Earth. The red giant Betelgeuse (Orion's right shoulder) and blue Rigel (Orion's left foot) stand out, as well as the three belt stars. From GJ 436's perspective, however, the stars do not align as they do in our sky. The Pleiades star cluster is located to the upper left of UCF-1.01.

The artist's animation depicts a Star Trek-like voyage out to GJ 436, finished with a flyby of UCF-1.01.

Starting from Earth, we quickly zoom out of the solar system into our sun's local neighborhood, populated by the closest stars that lie within a few light-years of Earth. Swinging around, we shift our attention to the dwarf star GJ 436, which is so faint that it is invisible to us until we get close enough to see its dim glow.

From here we move into the GJ 436 system, at first seeing the candidate planet UCF-1.01 as it transits its star. Although probably rocky in composition like Earth, UCF-1.01 would be a terrible place for life. The world orbits scorchingly close to its star, so in all likelihood this planet lacks an atmosphere and might even have a molten surface, as shown in this animation.

Near the end of the movie, a Neptune-sized exoplanet already known to exist around GJ 436, designated GJ 436b, appears in the background. Evidence for UCF-1.01 turned up when astronomers were studying this previously known world.