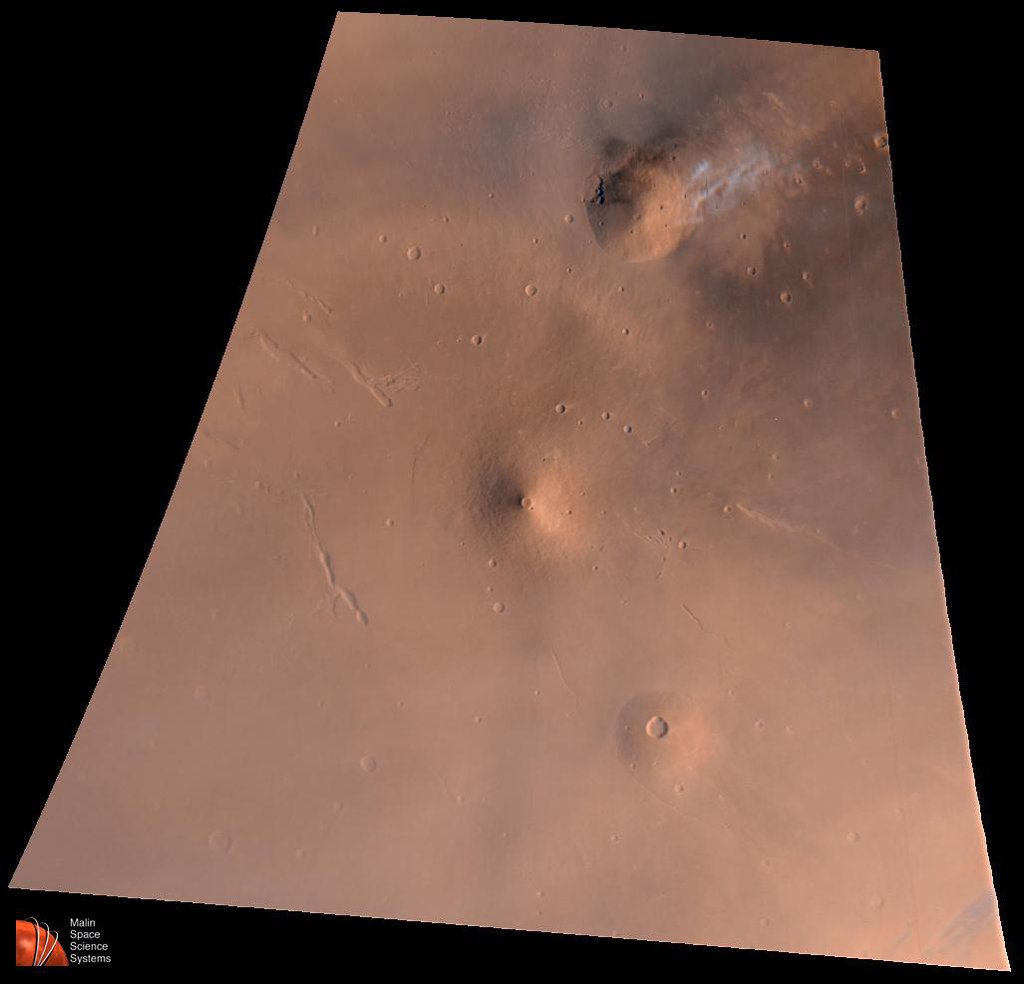 On July 4, 1998--the first anniversary of the Mars Pathfinder landing--Mars Global Surveyor's latest images were radioed to Earth with little fanfare. The images received on July 4, 1998, however, were very exciting because they included a rare crossing of the summit caldera of a major martian volcano. Elysium Mons is located at 25°N, 213°W, in the martian eastern hemisphere. Elysium Mons is one of three large volcanoes that occur on the Elysium Rise-- the others are Hecates Tholus (northeast of Elysium Mons) and Albor Tholus (southeast of Elysium Mons). The volcano rises about 12.5 kilometers (7.8 miles) above the surrounding plain, or about 16 kilometers (9.9 miles) above the martian datum-- the "zero" elevation defined by average martian atmospheric pressure and the planet's radius.

Elysium Mons was discovered by Mariner 9 in 1972. It differs in a number of ways from the familiar Olympus Mons and other large volcanoes in the Tharsis region. In particular, there are no obvious lava flows visible on the volcano's flanks. The lack of lava flows was apparent from the Mariner 9 images, but the new MOC high resolution image--obtained at 5.24 meters (17.2 feet) per pixel--illustrates that this is true even when viewed at higher spatial resolution.

Elysium Mons has many craters on its surface. Some of these probably formed by meteor impact, but many show no ejecta pattern characteristic of meteor impact. Some of the craters are aligned in linear patterns that are radial to the summit caldera--these most likely formed by collapse as lava was withdrawn from beneath the surface, rather than by meteor impact. Other craters may have formed by explosive volcanism. Evidence for explosive volcanism on Mars has been very difficult to identify from previous Mars spacecraft images. This and other MOC data are being examined closely to better understand the nature and origin of volcanic features on Mars.

This image: Elysium Volcanic Region as seen by MOC on July 2, 1998. Volcano near top center is Hecates Tholus--note bright clouds off its northeast flank. Volcano near center is Elysium Mons; volcano toward lower right is Albor Tholus. Red channel is MOC red wide angle image 40301, the blue channel is MOC blue wide angle image 40302, and the green channel is synthesized by averaging the red and blue bands. Image is an orthographic projection centered at 24.85°N, 213.25°W. The scale at the center of the projection is 4.65 kilometers (2.9 miles) per pixel. North is up, illumination is from the lower right.