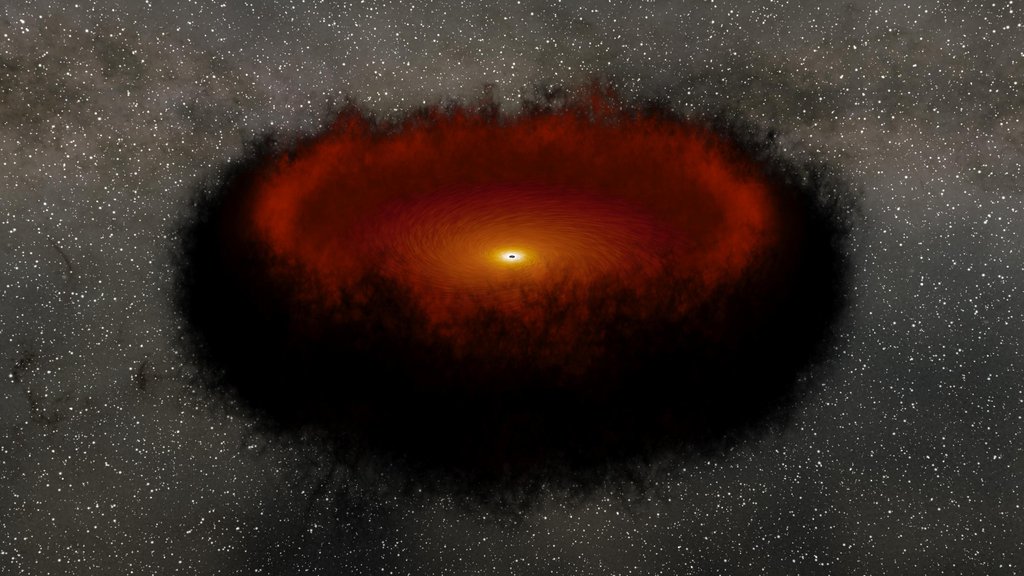 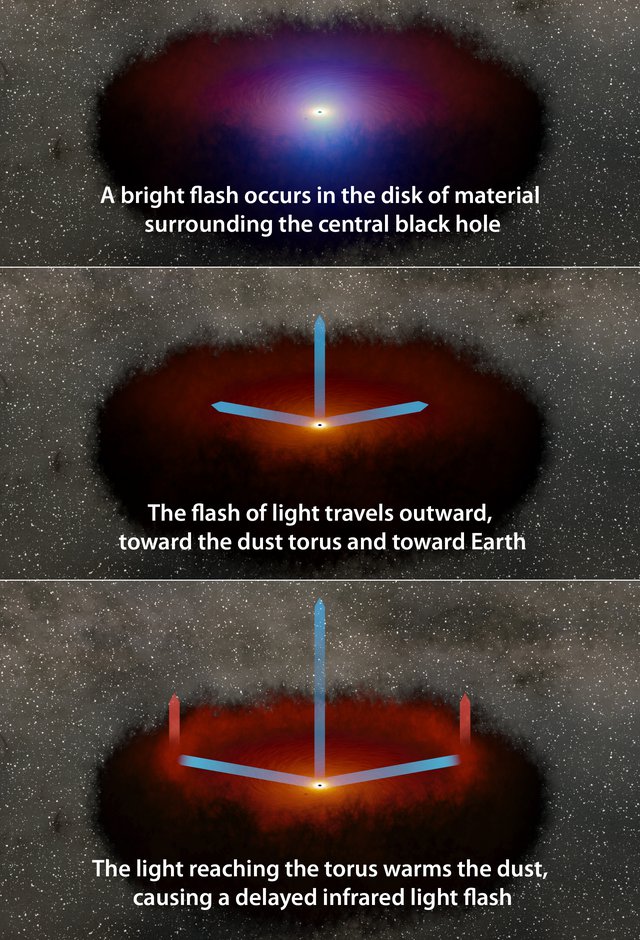 This animation shows the events that serve as the basis of an astrophysics technique called "echo mapping," also known as reverberation mapping. At center is a supermassive black hole surrounded by a disk of material called an accretion disk. As the disk gets brighter it sometimes even releases short flares of visible light. Blue arrows show the light from this flash traveling away from the black hole, both toward an observer on Earth and toward an enormous, doughnut-shaped structure (called a torus) made of dust. The light gets absorbed, causing the dust to heat up and release infrared light. This brightening of the dust is a direct response to — or, one might, say an "echo" — of the changes happening in the disk. Red arrows show this light traveling away from the galaxy, in the same direction as the initial flash of visible light. Thus an observer would see the visible light first, and (with the right equipment) the infrared light later.

Astronomers have previously proposed using echo mapping as a means of measuring distances to cosmic objects. If scientists can observe both the initial flare of visible light and the subsequent infrared brightening in the dust, they could in theory use that information to measure the disk's luminosity, which could then be used to measure the distance to that galaxy by comparing it to the galaxy's brightness as seen from Earth.

The temperature in the part of the disk closest to the black hole can reach tens of thousands of degrees but decreases with distance. When it reaches about 2,200 degrees Fahrenheit (1,200 Celsius), it is cool enough for dust to form. The more luminous the disk, the farther away from it the dust forms and the longer it takes light from the disk to reach the dust and produce the "echo."

The distance from the accretion disk to the inside of the dust doughnut can be billions or trillions of miles. Even light, traveling at 186,000 miles (300,000 kilometers) per second, can take months or years to cross it. NASA's Near Earth Object Wide Field Infrared Survey Explorer (NEOWISE), previously named WISE, surveys the entire sky about once every six months and is on track to complete 16 such surveys by the end of 2020, providing astronomers with repeated opportunities to observe galaxies and look for signs of those light echoes. A study using data from WISE measured the luminosity of over 500 black hole accretion disks using echo mapping, but the subsequent distance measurements lacked precision compared to other distance measuring techniques. Additional data and an improved understanding of dust torus dynamics could improve those measurements.

Figure 1 shows the progression of events used in echo mapping, from the flash of light from the accretion disk to the echo of that light off the dust torus.