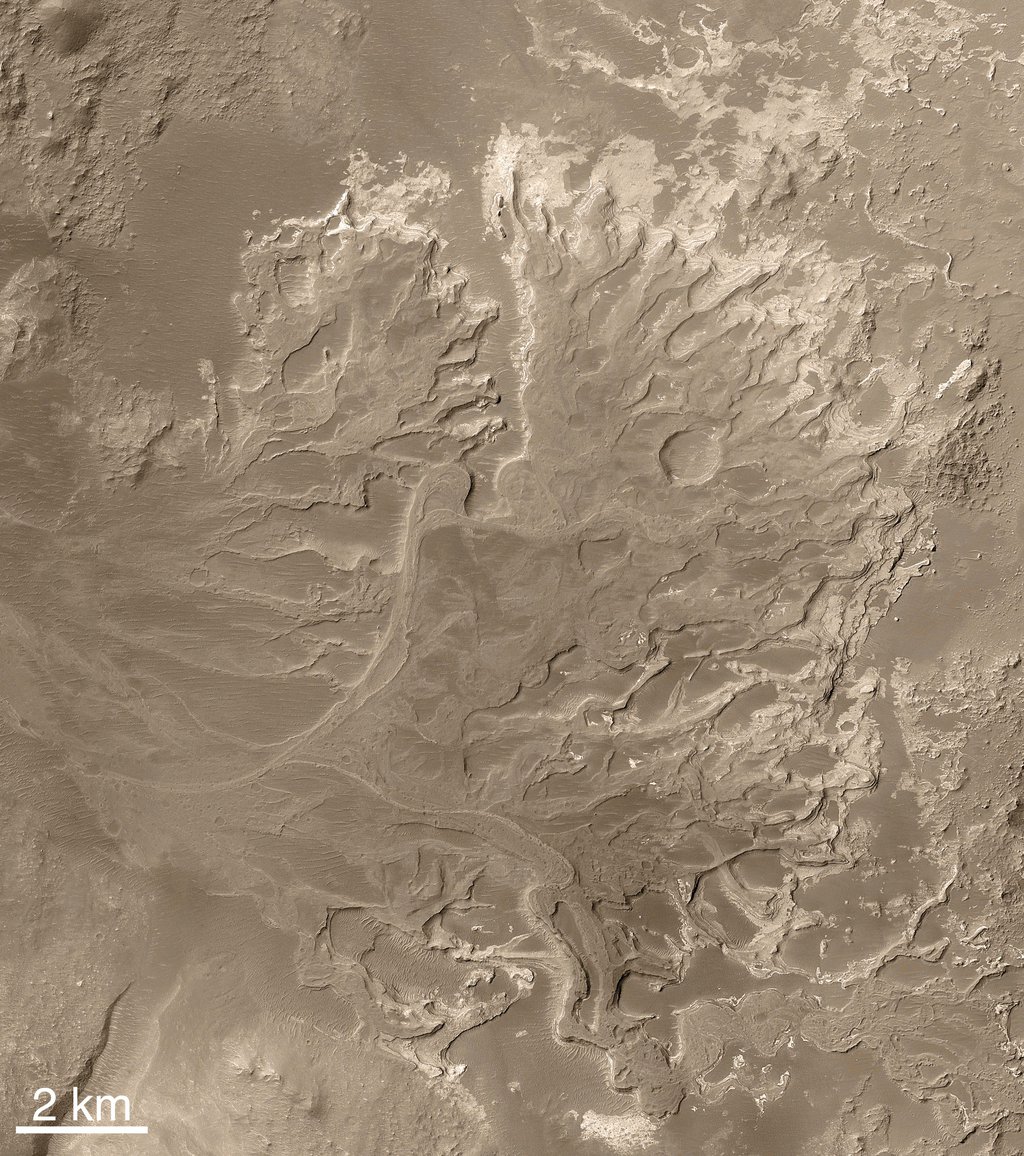 Scientifically, perhaps the most important result from use of the Mars Orbiter Camera on NASA's Mars Global Surveyor during that spacecraft's extended mission has been the discovery and documentation of a fossil delta. The feature is located in a crater northeast of Holden Crater, near 24.0 degrees south latitude, 33.7 degrees west longitude. Since the announcement of the discovery of the delta in November 2003, the International Astronomical Union has provided a provisional name (pending final approval) for the crater in which the landforms occur. The crater has been named Eberswalde, for a town in Germany.

This image offers a higher-resolution view of a portion of the fossil delta than any seen earlier. North is up. At the bottom of the frame, the image includes the north end of a looping, inverted, meandering channel. The image covers an area of about 3 by 3 kilometers (1.9 x 1.9 miles). It was produced using a technique called "compensated pitch and roll targeted observation," in which the rotation rate of the spacecraft is adjusted to match the ground speed under the camera. At full resolution, this map-projected image is at 50 centimeters (20 inches) per pixel.

Additional images from Mars Orbiter Camera provide some context (figure 4) and show a nearby portion of the fossil delta's inverted channels (figure 5) at a spatial scale of 1.5 meters (about 5 feet) per pixel. The relative positions of these three images are indicated in a mosaic image of the entire delta (figure 1), for which the unmarked version was released in November 2003 (PIA04869).

The first Mars Orbiter Camera narrow angle images of some of the landforms in the delta were acquired in 2000, during the Mars Global Surveyor primary mission, but those pictures did not show very well the unambiguous inverted channel forms. Not until the second Earth year of the orbiter's extended mission were the deltaic features recognized in Mars Orbiter Camera images obtained in March and June of 2002.

Following the initial observations in 2002, the Mars Orbiter Camera team began a systematic effort to map the entire Eberswalde Crater delta. Most of this imaging required slewing the whole spacecraft in a technique called "roll only targeted observation" so that it pointed the camera toward the feature. In this way, the camera team was able to build up a mosaic of the delta much more quickly than would have been the case if the team had simply relied upon chance crossing of the delta by the orbiter's usual ground track. This technique was not employed during Mars Global Surveyor's primary mission, except in the search for Mars Polar Lander, but became a routine part of the tool kit during the extended mission.

Even with the "roll only targeted observation" technique, it took more than one Earth year to build up a complete mosaic of images of the delta. In the meantime, the first data showing the deltaic landforms were archived and released to the public and scientific community, long before the Mars Orbiter Camera team's analysis and mosaic were complete. Some scientists began independent analyses of the landform at that time. The initial analysis and announcement of the feature was finally published in November 2003.

The Eberswalde delta provides the first clear, "smoking gun" evidence that some valleys on Mars experienced persistent flow of a liquid with the physical properties of water over an extended period of time, as do rivers on Earth. In addition, because the delta today is lithified -- that is, hardened to form rock -- it provided the first unambiguous evidence that some martian sedimentary rocks were deposited in a liquid (presumably, water) environment. The presence of meandering channels, a cut-off meander, and crisscrossing channels at different elevations (one above the other), provided the clear geologic evidence for these interpretations.

After the sediments were deposited to form the delta, the material was further buried by other materials -- probably sediments -- that are no longer present. The entire package of buried material became cemented and hardened to form rock. Later, erosive processes such as wind stripped away the overlying rock, re-exposing the delta. Now preserved essentially as a fossil, the former floors of channels in the delta became inverted, to form ridges, by erosion. Channels can be inverted by erosion on both Earth and Mars. Usually this happens when the channel floor, or the material filling the channel, is harder to erode than the surrounding material into which the channel was cut. In some cases, the channels on Earth and Mars have been filled by lava to make them more resistant to erosion. In the case of Eberswalde, there are no lava flows; instead, the channel floors may have been rendered resistant to erosion either by being better-cemented than the surrounding material, or composed of coarser-grained sediment (such as sand and gravel as opposed to silt), or both.