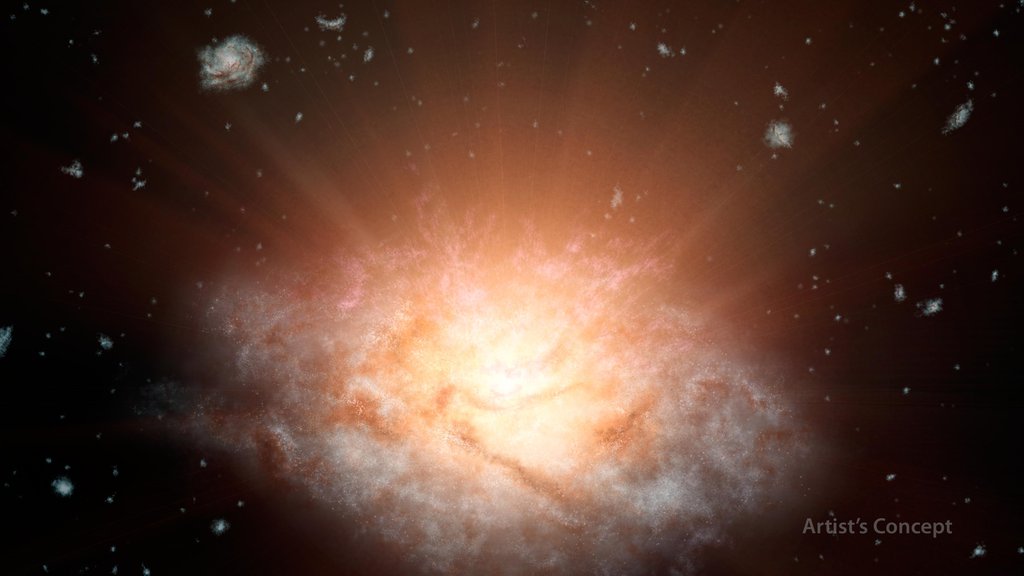 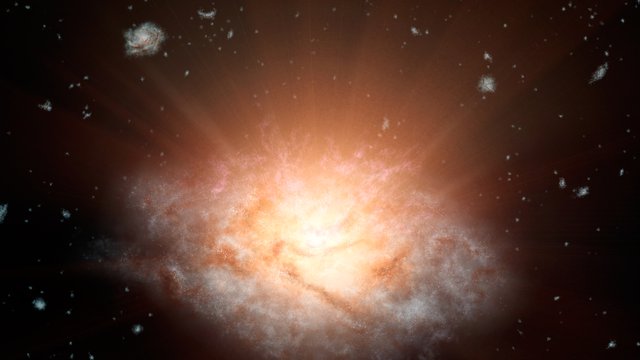 This artist's concept depicts the current record holder for the most luminous galaxy in the universe. The galaxy, named WISE J224607.57-052635.0, is erupting with light equal to more than 300 trillion suns. It was discovered by NASA's Wide-Field Infrared Survey Explorer, or WISE. The galaxy is smaller than the Milky Way, yet puts out 10,000 times more energy.

Scientists think that a supermassive black hole at the center of this dusty galaxy is busily consuming gaseous material in a colossal growth spurt. As the gas is dragged toward the black hole, it heats up and blasts out visible, ultraviolet and X-ray light. The dust swaddling the galaxy absorbs this light and heats up, radiating longer-wavelength, infrared light. The dust also blocks our view of shorter, visible-light wavelengths, while letting longer-wavelengths through. This is similar to what happens when sunlight streams through our dusty atmosphere, producing a brilliant red sunrise.

In fact, more than 99 percent of the light escaping from this dusty galaxy is infrared. As a result, it is much harder to see with optical telescopes.

Because light from the galaxy hosting the black hole has traveled 12.5 billion years to reach us, astronomers are seeing the object as it was in the distant past. During this epoch, galaxies would have been more than five times closer together than they are now, as illustrated in the background of the artist's concept. This is due to the expansion of space -- space itself and the galaxies in it are stretching apart from each other at ever-increasing speeds.