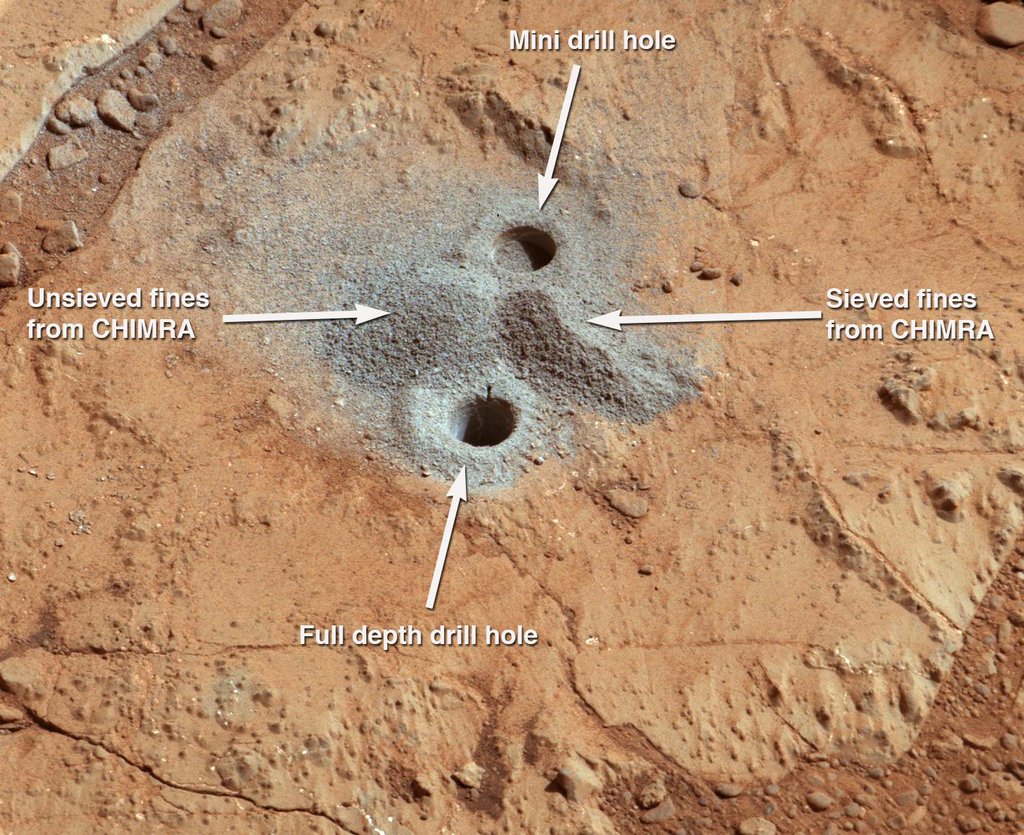 Click on an individual image for larger views
This image shows the first holes into rock drilled by NASA's Mars rover Curiosity, with drill tailings around the holes plus piles of powdered rock collected from the deeper hole and later discarded after other portions of the sample had been delivered to analytical instruments inside the rover. The image was taken by the telephoto-lens camera of the rover's Mast Camera (Mastcam) instrument in early afternoon of the 229th Martian day, or sol, of Curiosity's work on Mars (March 29, 2013). The site is on a patch of flat rock called "John Klein" in the "Yellowknife Bay" area of Mars' Gale Crater.

Analysis of the collected John Klein rock sample by the Chemistry and Mineralogy (CheMin) and Sample Analysis at Mars (SAM) instruments inside Curiosity produced evidence of an ancient wet environment that provided favorable conditions for microbial life, including elemental ingredients for life plus a chemical energy gradient such as some terrestrial microbes exploit as an energy source.

The sample processing and delivery tool on Curiosity, called the Collection and Handling for In-situ Martian Rock Analysis, or CHIMRA, put the collected powder through a sieve to screen out particles larger than 0.006 inch (150 microns) across, and then delivered portions of the sieved material to the instruments. After delivering a few portions for analysis over the course of several weeks, CHIMRA released both the material that had not passed through the sieve and the leftover sieved material, dropping them in two piles near the drill hole on Sol 229 (March 29, 2013). In this image from a few minutes later, the unsieved material forms a mound to the left of a line between the two holes and the leftover sieved sample material forms a mound to the right.