Curiosity's Progress on Route from 'Glenelg' to Mount Sharp 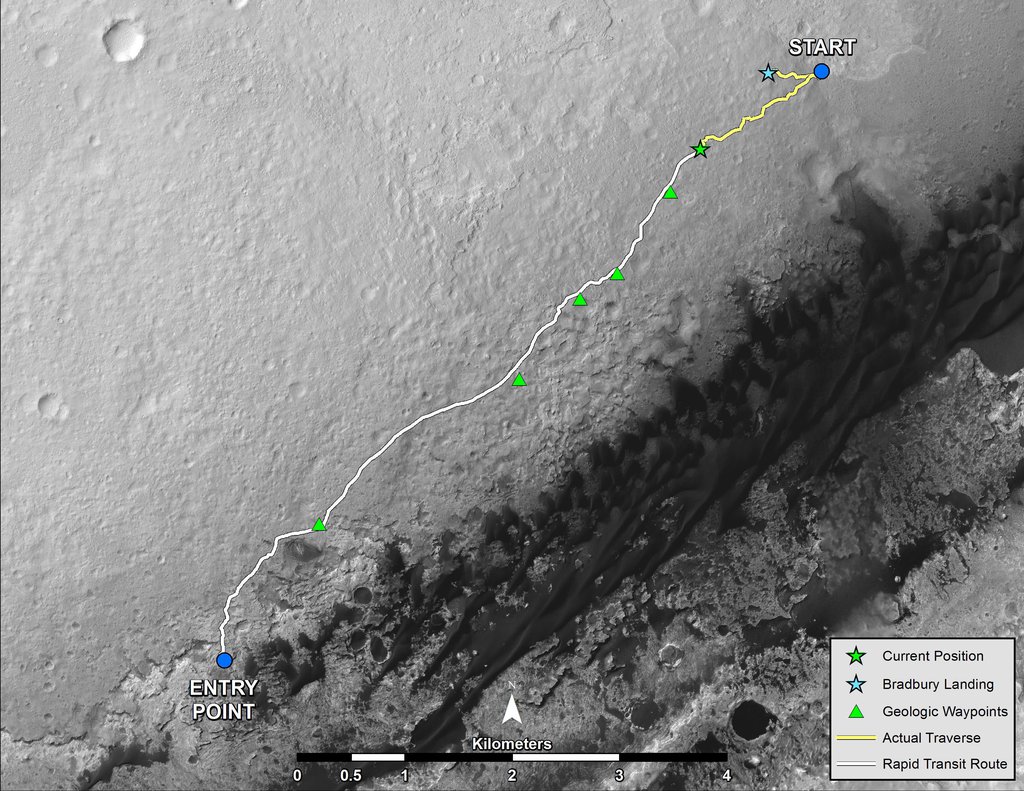 NASA's Mars rover Curiosity left the "Glenelg" area on July 4, 2013, on a "rapid transit route" to the entry point for the mission's next major destination, the lower layers of Mount Sharp. As of Aug. 27, 2013, NASA's Mars rover Curiosity has driven about 0.86 mile (1.39 kilometers) since leaving Glenelg, with about 4.46 miles (7.18 kilometers) remaining to get to the entry point. The rover's drive on Aug. 27, the 376th sol (Martian day) of the mission, was the first Curiosity drive using the rover's autonomous navigation capability to safely drive beyond the area that rover drivers on Earth could evaluate from images before the drive. The rover can analyze stereo images that it takes during the drive and choose the best path to continue driving.

Curiosity's science team has identified some geological waypoints along the rapid transit route where driving may be suspended for a few sols to allow time for studying local features. The rover has about 0.31 mile (500 meters) left to go before reaching the first of these waypoints. For a broader-context image of the area, see https://photojournal.jpl.nasa.gov/catalog/PIA16058 .

This map shows Curiosity's location at the end of the Sol 376 drive, in the context of the mission's initial drive from the landing site at Bradbury Landing to Glenelg and the route of the current drive from Glenelg to the Mount Sharp entry point. Geological waypoints along the route are also indicated. The base map is from the orbiting HiRISE camera. North is toward the top. The dark ground south of the rapid transit route has dunes of dark, wind-blown material. The 4-kilometer scale bar on the map is about 2.5 miles long.