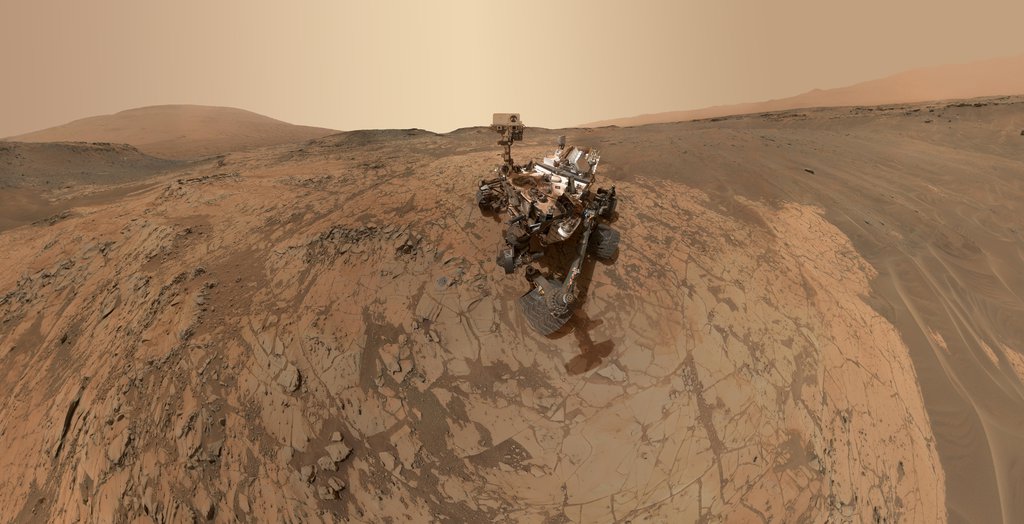 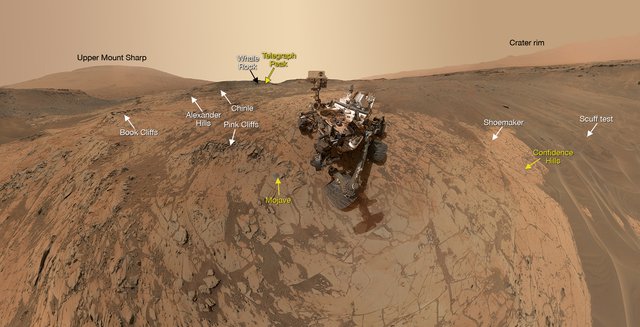 This self-portrait of NASA's Curiosity Mars rover shows the vehicle at the "Mojave" site, where its drill collected the mission's second taste of Mount Sharp.

The scene combines dozens of images taken during January 2015 by the Mars Hand Lens Imager (MAHLI) camera at the end of the rover's robotic arm. The pale "Pahrump Hills" outcrop surrounds the rover, and the upper portion of Mount Sharp is visible on the horizon. Darker ground at upper right and lower left holds ripples of wind-blown sand and dust.

The annotated version above labels several of the sites Curiosity has investigated during three passes up the Pahrump Hills outcrop examining the outcrop at increasing levels of detail. The rover used its sample-collecting drill at "Confidence Hills" as well as at Mojave, and in late February was assessing "Telegraph Peak" as a third drilling site.

The view does not include the rover's robotic arm. Wrist motions and turret rotations on the arm allowed MAHLI to acquire the mosaic's component images. The arm was positioned out of the shot in the images, or portions of images, that were used in this mosaic. This process was used previously in acquiring and assembling Curiosity self-portraits taken at sample-collection sites "Rocknest" (PIA16468), "John Klein" (PIA16937) and "Windjana" (PIA18390).

Curiosity used its drill to collect a sample of rock powder from target "Mojave 2" at this site on Jan. 31, 2015. The full-depth, sample-collection hole and the shallower preparation test hole beside it are visible in front of the rover in this self-portrait, and in more detail at PIA19115. The Mojave site is in the "Pink Cliffs" portion of the Pahrump Hills outcrop. The outcrop is an exposure of the Murray formation, which forms the basal geological layer of Mount Sharp. Views of Pahrump Hills from other angles are at PIA19039 and the inset at http://mars.jpl.nasa.gov/msl/multimedia/images/?ImageID=6968.

Photojournal Note: Also available is the full resolution TIFF file PIA19142_full.tif. This file may be too large to view from a browser; it can be downloaded onto your desktop by right-clicking on the previous link and viewed with image viewing software.