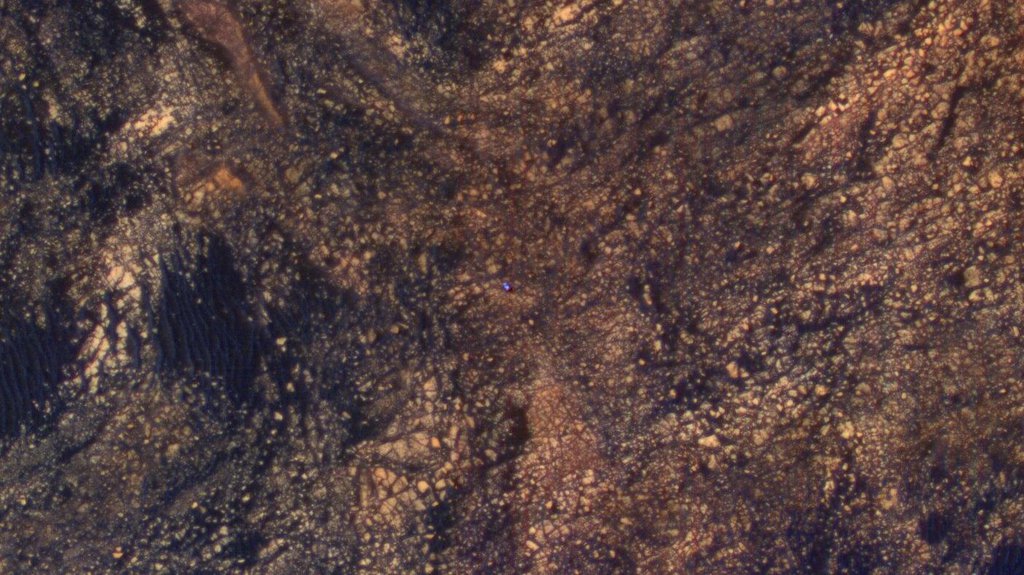 The feature that appears bright blue at the center of this scene is NASA's Curiosity Mars rover on the northwestern flank of Mount Sharp, viewed by NASA's Mars Reconnaissance Orbiter. Curiosity is approximately 10 feet long and 9 feet wide (3.0 meters by 2.8 meters).

The view is a cutout from observation ESP_050897_1750 taken by the High Resolution Imaging Science Experiment (HiRISE) camera on the orbiter on June 5, 2017. HiRISE has been imaging Curiosity about every three months, to monitor the surrounding features for changes such as dune migration or erosion.

When the image was taken, Curiosity was partway between its investigation of active sand dunes lower on Mount Sharp, and "Vera Rubin Ridge," a destination uphill where the rover team intends to examine outcrops where hematite has been identified from Mars orbit. The rover's surroundings include tan rocks and patches of dark sand. The rover's location that day is shown at https://mars.nasa.gov/multimedia/images/2017/curiositys-traverse-map-through-sol-1717 as the point labeled 1717. Images taken by Curiosity's Mast Camera (Mastcam) at that location are at https://mars.nasa.gov/msl/multimedia/raw/?s=1717&camera=MAST%5F.

As in previous HiRISE color images of Curiosity since the rover was at its landing site, the rover appears bluer than it really is. HiRISE color observations are recorded in a red band, a blue-green band and an infrared band, and displayed in red, green and blue. This helps make differences in Mars surface materials apparent, but does not show natural color as seen by the human eye.

Lower Mount Sharp was chosen as a destination for the Curiosity mission because the layers of the mountain offer exposures of rocks that record environmental conditions from different times in the early history of the Red Planet. Curiosity has found evidence for ancient wet environments that offered conditions favorable for microbial life, if Mars has ever hosted life.