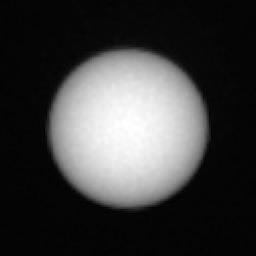 This series of images shows the Martian moon Phobos as it crossed in front of the Sun, as seen by NASA's Curiosity Mars rover on Tuesday, March 26, 2019 (the 2,359th sol, or Martian day, of the mission).

The images were captured by Curiosity's telephoto-lens camera, called its Mast Camera (Mastcam) using its right-eye solar filter. The images have been sped up by a factor of 10; the entire eclipse lasted about 35 seconds.