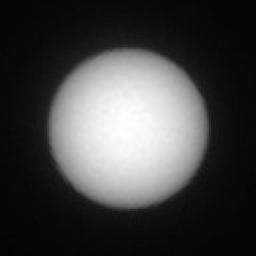 This series of images shows the Martian moon Deimos as it crossed in front of the Sun, as seen by NASA's Curiosity Mars rover on Sunday, March 17, 2019 (the 2,350th Martian day, or sol, of the mission).

The images were captured by Curiosity's telephoto-lens camera, called its Mast Camera pair (right Mastcam). The images have been sped up by a factor of 10. Deimos is small enough that scientists consider it a transit rather than an eclipse. The Deimos transit lasted several minutes.