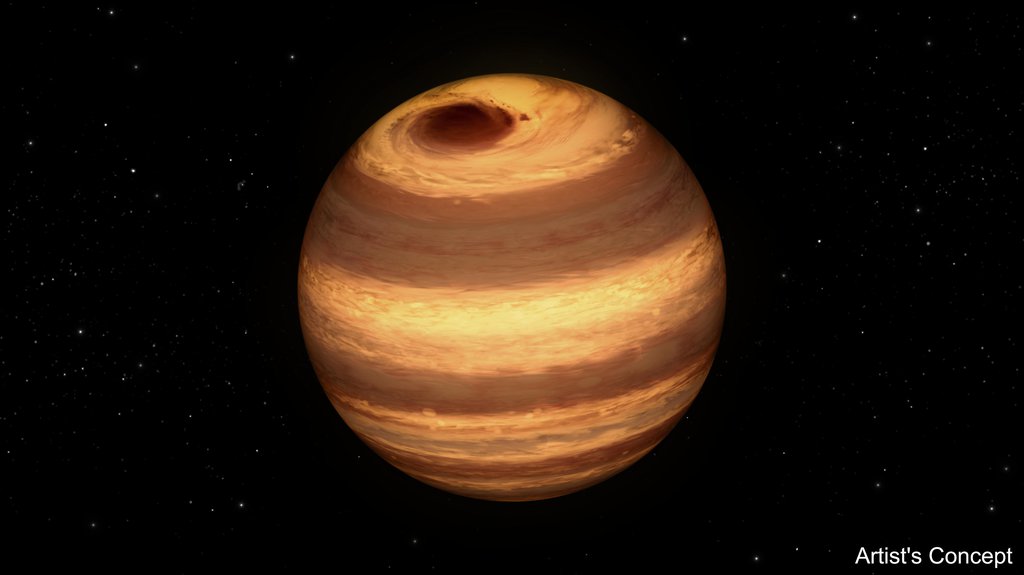 This illustration shows a cool star, called W1906+40, marked by a raging storm near one of its poles. The storm is thought to be similar to the Great Red Spot on Jupiter. Scientists discovered it using NASA's Kepler and Spitzer space telescopes.

The location of the storm is estimated to be near the north pole of the star based on computer models of the data. The telescopes cannot see the storm itself, but learned of its presence after observing how the star's light changes over time. The storm travels around with the star, making a full lap about every 9 hours. When it passes into a telescope's field of view, it causes light of particular infrared and visible wavelengths to dip in brightness.

The storm has persisted for at least two years. Astronomers aren't sure why it has lasted so long.

While planets are known to have cloudy storms, this is the best evidence yet for a star with the same type of storm. The star, W1906+40, belongs to a thermally cool class of objects called L-dwarfs. Some L-dwarfs are considered stars because they fuse atoms and generate light, as our sun does, while others, called brown dwarfs, are known as "failed stars" for their lack of atomic fusion.

The L-dwarf W1906+40 is thought to be a star based on estimates of its age (the older the L-dwarf, the more likely it is a star). Its temperature is about 2,200 Kelvin (3,500 degrees Fahrenheit). That may sound scorching hot, but as far as stars go, it is relatively cool. Cool enough, in fact, for clouds to form in its atmosphere.