Comparison of TRAPPIST-1 to the Solar System 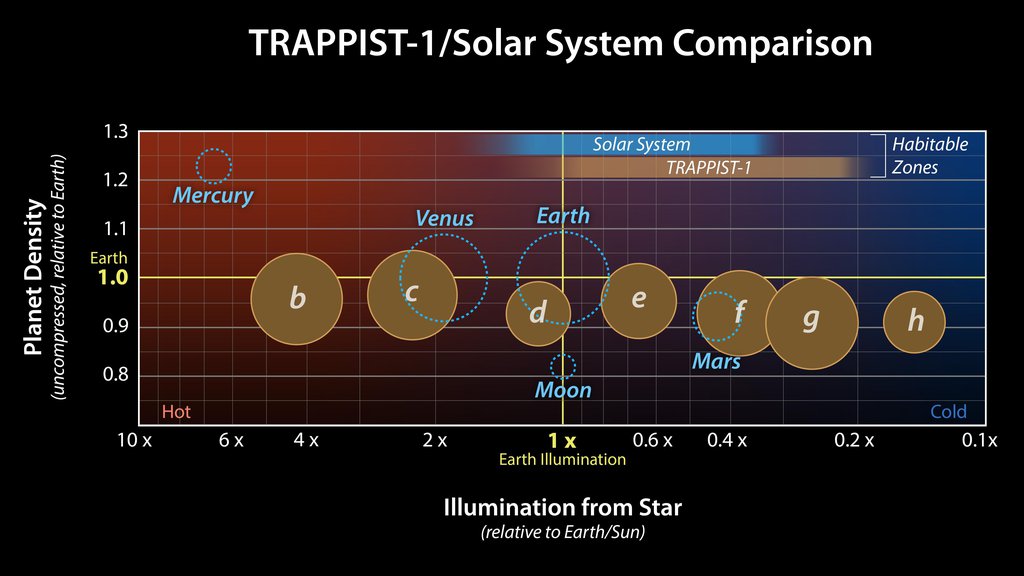 This graph presents measured properties of the seven TRAPPIST-1 exoplanets (labeled b through h), showing how they stack up with one another as well as with Earth and the other inner rocky worlds in our own solar system. The relative sizes of the planets are indicated by the circles. All of the known TRAPPIST-1 planets are larger than Mars, with five of them within 15&percnt of the diameter of Earth.

The plot shows that the uncompressed densities of the TRAPPIST-1 planets are similar to one another, suggesting they may have all have a similar composition. The four rocky planets in our own solar system show more variation in density compared to the seven TRAPPIST-1 planets. Mercury, for example, contains a much higher percentage of iron than the other three rocky planets and thus has a much higher uncompressed density.

The horizontal axis shows the level of illumination that each planet receives from its host star. The TRAPPIST-1 star is a mere 9&percnt the mass of our Sun, and its temperature is much cooler. But because the TRAPPIST-1 planets orbit so closely to their star, they receive comparable levels of light and heat to Earth and its neighboring planets.

The corresponding "habitable zones" — regions where an Earth-like planet could potentially support liquid water on its surface — of the two planetary systems are indicated near the top of the plot. The the two zones do not line up exactly because the cooler TRAPPIST-1 star emitting more of its light in the form of infrared radiation that is more efficiently absorbed by an Earth-like atmosphere. Since it takes less illumination to reach the same temperatures, the habitable zone shifts farther away from the star.

The masses and densities of the TRAPPIST-1 planets were determined by measurements of slight variations in the timings of their orbits using extensive observations made by NASA's Spitzer and Kepler space telescopes, in combination with data from Hubble and a number of ground-based telescopes. The latest analysis, which includes Spitzer's complete record of over 1,000 hours of TRAPPIST-1 observations, has reduced the uncertainties of the mass measurements to a mere 3-6&percnt. These are among the most accurate measurements of planetary masses anywhere outside of our solar system.