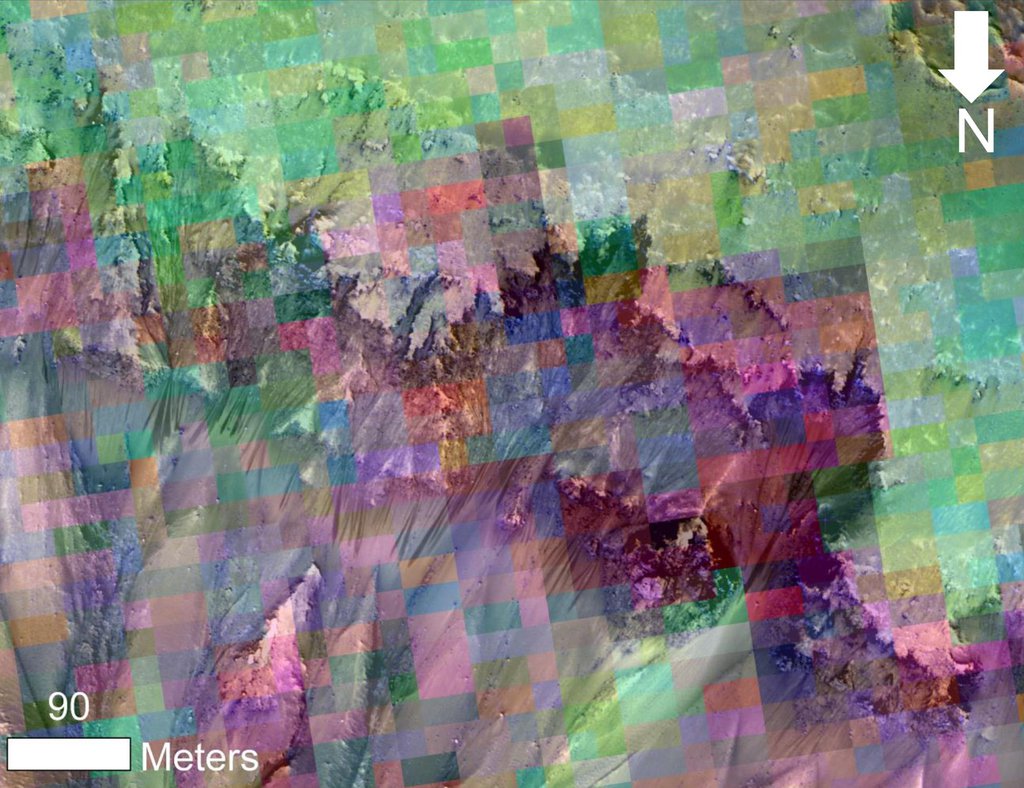 This image combines a photograph of seasonal dark flows on a Martian slope with a grid of colors based on data collected by a mineral-mapping spectrometer observing the same area. The area is at Palikir Crater in the southern hemisphere of Mars.

The photograph is from the High Resolution Imaging Science Experiment (HiRISE) camera. The composition information, as an image with pixels appearing as a grid of squares, is from the Compact Reconnaissance Imaging Spectrometer for Mars (CRISM). Both of these instruments are on NASA's Mar Reconnaissance Orbiter. The view is oriented with north toward the bottom. The scale bar at lower left indicates 90 meters (295 feet).

These dark, warm-season flows are called "recurring slope lineae" or RSL. Researchers are using observations from Mars orbiters to study the possibility that RSL result from action of salty liquid water. This image was included in a paper by Lujendra Ojha of Georgia Institute of Technology, Atlanta, and co-authors in Geophysical Research Letters.

The purple and pink colors of the CRISM image represent spectra with absorption of light at wavelengths of 920 nanometers and 530 nanometers. The strength of these absorption bands at this site varies seasonally -- weaker when the RSL are inactive and stronger when the RSL are active. Absorption at 530 nanometers can indicate a concentration of ferric iron, so this could be a clue that the fluctuations observed in the absorption bands of iron minerals may be related to the RSL activity. Other image products from the same Nov. 2, 2007, HiRISE observation are available at http://www.uahirise.org/PSP_005943_1380.