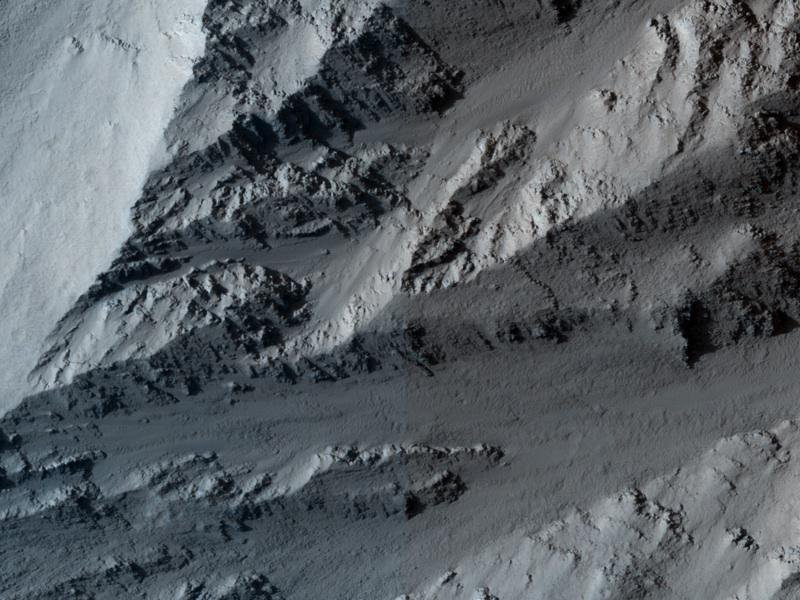 This image covers the northern edge of the largest volcano in the solar system, Olympus Mons on Mars. The margin of Olympus Mons is defined by a massive cliff many kilometers (several miles) tall. At this location, it is nearly 7 kilometers (23,000 feet) tall. The cliff exposes the guts of the volcano, revealing interbedded hard and soft layers. The hard layers are lava and the soft layers may be dust (from large dust storms) or volcanic ash.

The High Resolution Imaging Science Experiment (HiRISE) camera on NASA's Mars Reconnaissance Orbiter recorded this image on March 2, 2010. The target for this HiRISE observation was a suggestion submitted through the camera team's HiWish public-suggestion program. For more information about how to submit target suggestions, see http://uahirise.org/hiwish/.

Most scientists think the cliffs formed by landslides. This collapse is driven by the weight of the huge volcano exceeding the strength of the rocks it is built of.

This image covers a swath of ground about 1 kilometer (about two-thirds of a mile) wide. It is a portion of HiRISE observation ESP_016886_2030, which is centered at 22.95 degrees north latitude, 224.76 degrees east longitude. The season on Mars is northern-hemisphere spring. Other image products from this observation are available at http://hirise.lpl.arizona.edu/ESP_016886_2030.

Color images from HiRISE combine information from detectors with three different color filters: red, infrared, and blue-green. Thus they include information from part of the spectrum human eyes cannot see and are not true color as the eye would see. The resulting false color helps to show differences among surface materials.