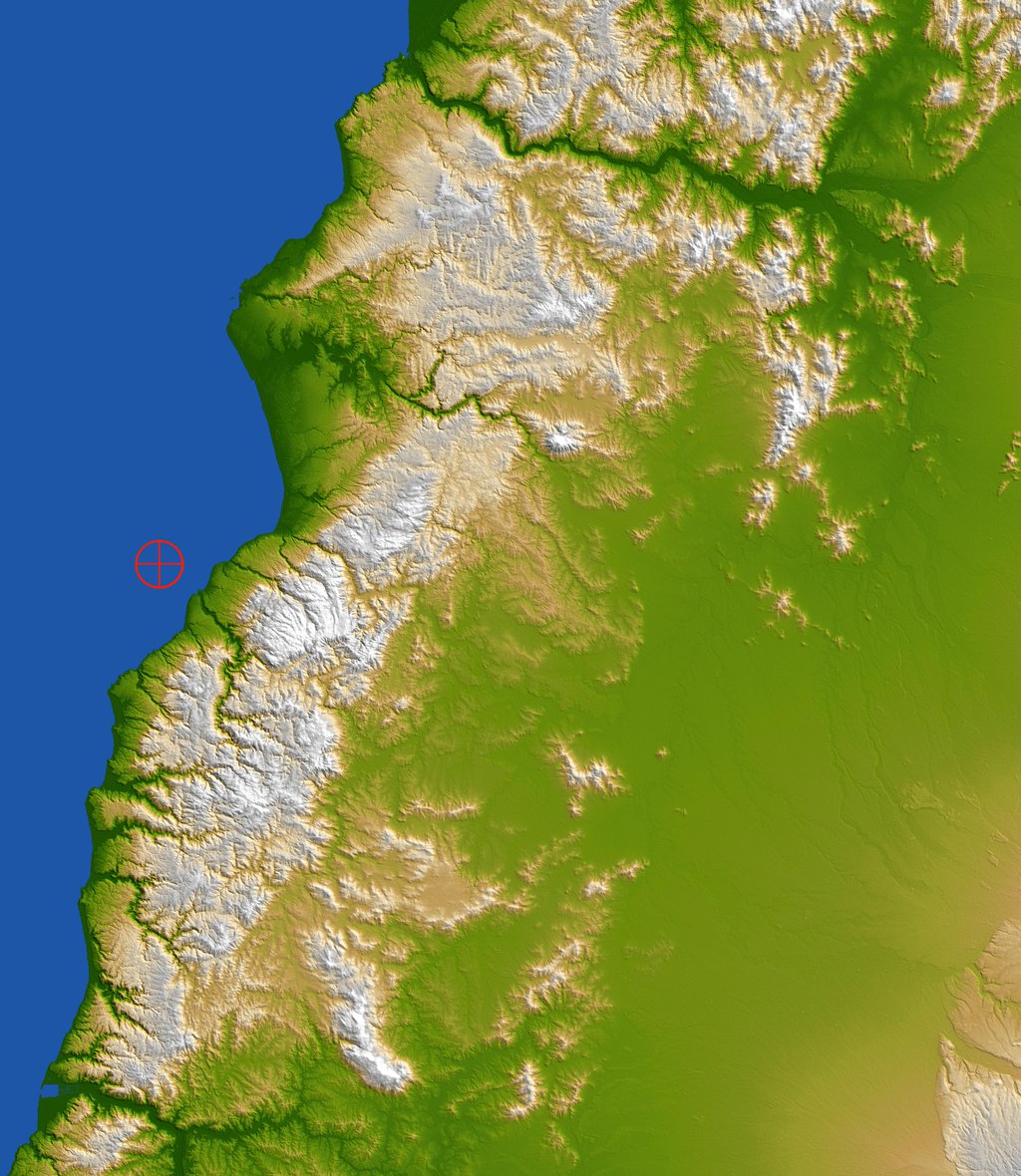 The topography of coastal Chile is well shown in this color-coded shaded relief view generated with digital elevation data from the Shuttle Radar Topography Mission (SRTM). On Feb. 27, 2010, a magnitude 8.8 earthquake struck just offshore of the Maule region (the epicenter is indicated by the red marker) in the Bahia de Chanco.

The earthquake occurred offshore near the boundary between the Nazca and South American tectonic plates, where the floor of the Pacific Ocean is being subducted, or pulled down, into Earth's interior underneath South America. Coastal Chile has a history of very large earthquakes, and the Feb. 27 event originated about 230 kilometers (143 miles) north of the source region of the magnitude 9.5 earthquake of May 1960, the largest earthquake worldwide in the last 200 years or more.

The scene is dominated by the Cordillera de la Costa, or Coast Range, running parallel to the Andes for much of the Chilean Pacific coast. The range has a strong influence on the climate of Chile and produces a rain shadow to the east, allowing a more exuberant vegetation to grow in the range than in the interior. Between the Coast Range and the Andes lies the Central Valley, a fertile region and the agricultural heartland of Chile. At this latitude, the Central Valley has a Mediterranean climate, with temperatures dropping and precipitation increasing in a regular pattern from north to south. Winters are mild and summers are usually moderately hot and dry.

Elevation data used in this image were acquired by the Shuttle Radar Topography Mission aboard the Space Shuttle Endeavour, launched on Feb. 11, 2000. SRTM used the same radar instrument that comprised the Spaceborne Imaging Radar-C/X-Band Synthetic Aperture Radar (SIR-C/X-SAR) that flew twice on the Space Shuttle Endeavour in 1994. SRTM was designed to collect 3-D measurements of Earth's surface. To collect the 3-D data, engineers added a 60-meter (approximately 200-foot) mast, installed additional C-band and X-band antennas, and improved tracking and navigation devices. The mission is a cooperative project between NASA, the National Geospatial-Intelligence Agency (NGA) of the U.S. Department of Defense and the German and Italian space agencies. It is managed by NASA's Jet Propulsion Laboratory, Pasadena, Calif., for NASA's Science Mission Directorate, Washington, D.C.