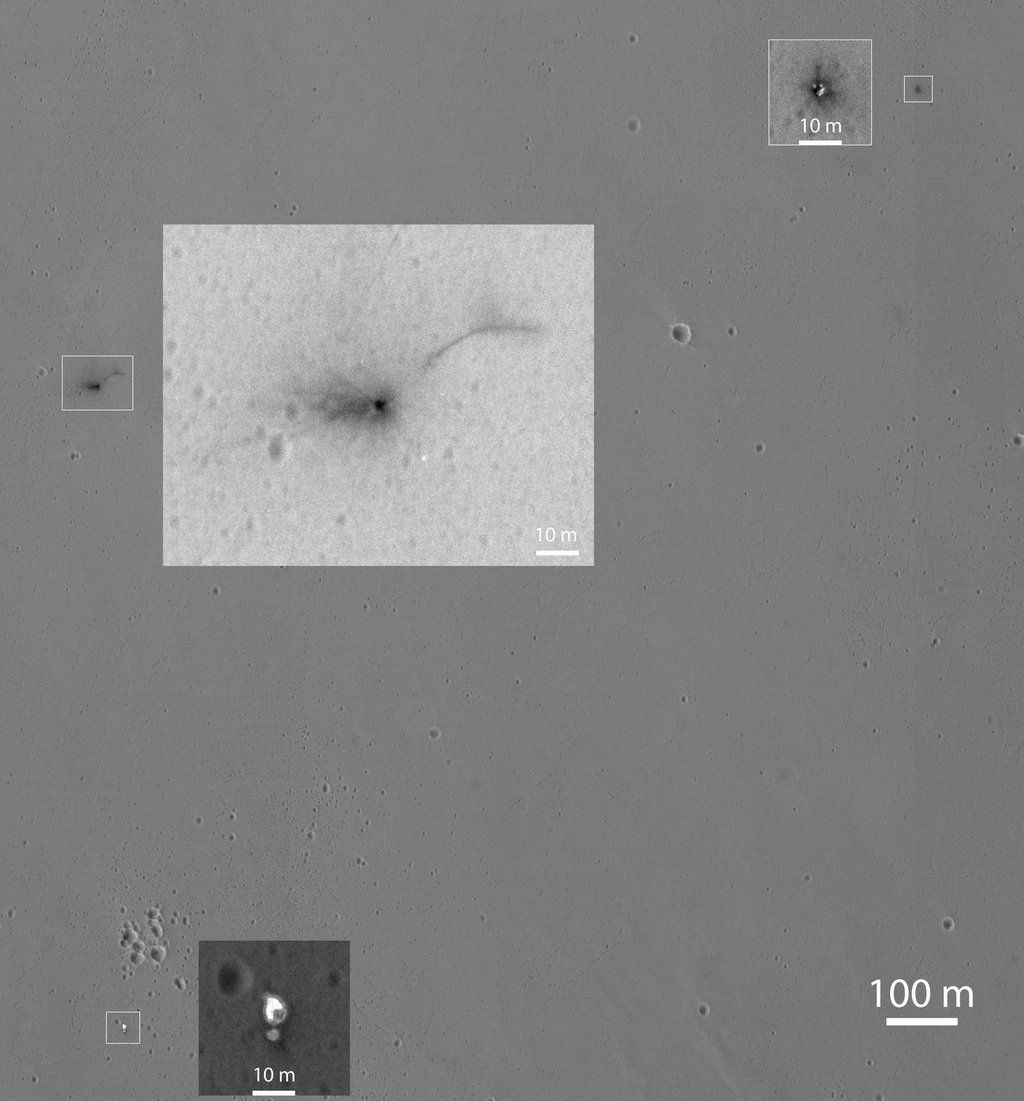 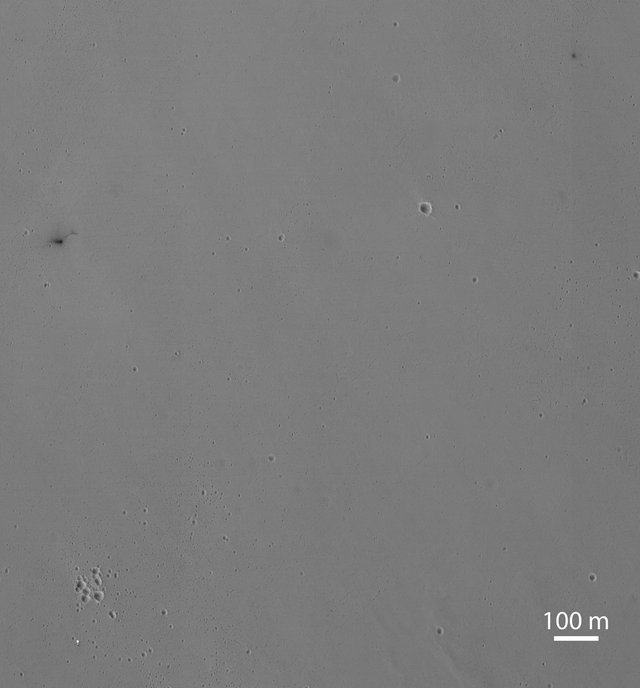 This Oct. 25, 2016, image shows the area where the European Space Agency's Schiaparelli test lander reached the surface of Mars, with magnified insets of three sites where components of the spacecraft hit the ground. It is the first view of the site from the High Resolution Imaging Science Experiment (HiRISE) camera on NASA's Mars Reconnaissance Orbiter taken after the Oct. 19, 2016, landing event.

The Schiaparelli test lander was one component of ESA's ExoMars 2016 project, which placed the Trace Gas Orbiter into orbit around Mars on the same arrival date.

This HiRISE observation adds information to what was learned from observation of the same area on Oct. 20 by the Mars Reconnaissance Orbiter's Context Camera (CTX). Of these two cameras, CTX covers more area and HiRISE shows more detail. A portion of the HiRISE field of view also provides color information. The impact scene was not within that portion for the Oct. 25 observation, but an observation with different pointing to add color and stereo information is planned.

This Oct. 25 observation shows three locations where hardware reached the ground, all within about 0.9 mile (1.5 kilometer) of each other, as expected. The annotated version includes insets with six-fold enlargement of each of those three areas. Brightness is adjusted separately for each inset to best show the details of that part of the scene. North is about 7 degrees counterclockwise from straight up. The scale bars are in meters.

At lower left is the parachute, adjacent to the back shell, which was its attachment point on the spacecraft. The parachute is much brighter than the Martian surface in this region. The smaller circular feature just south of the bright parachute is about the same size and shape as the back shell, (diameter of 7.9 feet or 2.4 meters).

At upper right are several bright features surrounded by dark radial impact patterns, located about where the heat shield was expected to impact. The bright spots may be part of the heat shield, such as insulation material, or gleaming reflections of the afternoon sunlight.

According to the ExoMars project, which received data from the spacecraft during its descent through the atmosphere, the heat shield separated as planned, the parachute deployed as planned but was released (with back shell) prematurely, and the lander hit the ground at a velocity of more than 180 miles per hour (more than 300 kilometers per hour).

At mid-upper left are markings left by the lander's impact. The dark, approximately circular feature is about 7.9 feet (2.4 meters) in diameter, about the size of a shallow crater expected from impact into dry soil of an object with the lander's mass -- about 660 pounds (300 kilograms) -- and calculated velocity. The resulting crater is estimated to be about a foot and a half (half a meter) deep. This first HiRISE observation does not show topography indicating the presence of a crater. Stereo information from combining this observation with a future one may provide a way to check. Surrounding the dark spot are dark radial patterns expected from an impact event. The dark curving line to the northeast of the dark spot is unusual for a typical impact event and not yet explained. Surrounding the dark spot are several relatively bright pixels or clusters of pixels. They could be image noise or real features, perhaps fragments of the lander. A later image is expected to confirm whether these spots are image noise or actual surface features.