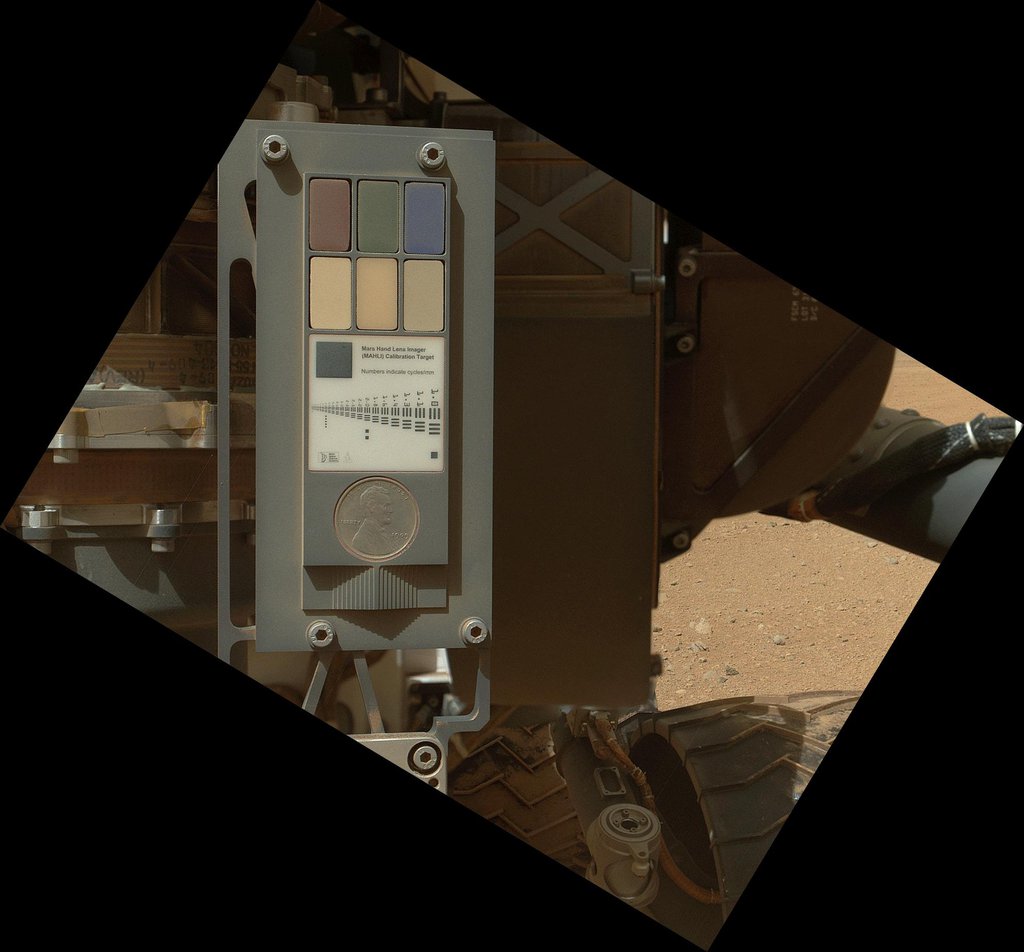 This view of the calibration target for the Mars Hand Lens Imager (MAHLI) aboard NASA's Mars rover Curiosity combines two images taken by that camera during the 34th Martian day, or sol, of Curiosity's work on Mars (Sept. 9, 2012). Part of Curiosity's left-front and center wheels and a patch of Martian ground are also visible.

The camera is in the turret of tools at the end of Curiosity's robotic arm. Its calibration target is on the rover body near the base of the arm. The Sol 34 imaging by MAHLI was part of a week-long set of activities for characterizing the movement of the arm in Mars conditions. MAHLI has adjustable focus. The camera took two images with the same pointing: one with the calibration target in focus and one with the wheel and Martian ground in focus. The view here combines in-focus portions from these shots.

The calibration target for the Mars Hand Lens Imager (MAHLI) instrument includes color references, a metric bar graphic, a 1909 VDB Lincoln penny, and a stair-step pattern for depth calibration. The penny is a nod to geologists' tradition of placing a coin or other object of known scale as a size reference in close-up photographs of rocks, and it gives the public a familiar object for perceiving size easily when it will be viewed by MAHLI on Mars.

The new MAHLI images show that the calibration target has a coating of Martian dust on it. This is unsurprising -- the target was facing directly toward the plume of dust stirred up by the sky crane's descent engines during the final phase of the 6 August 2012 landing.

The main purpose of Curiosity's MAHLI camera is to acquire close-up, high-resolution views of rocks and soil at the rover's Gale Crater field site. The camera is capable of focusing on any target at distances of about 0.8 inch (2.1 centimeters) to infinity, providing versatility for other uses.