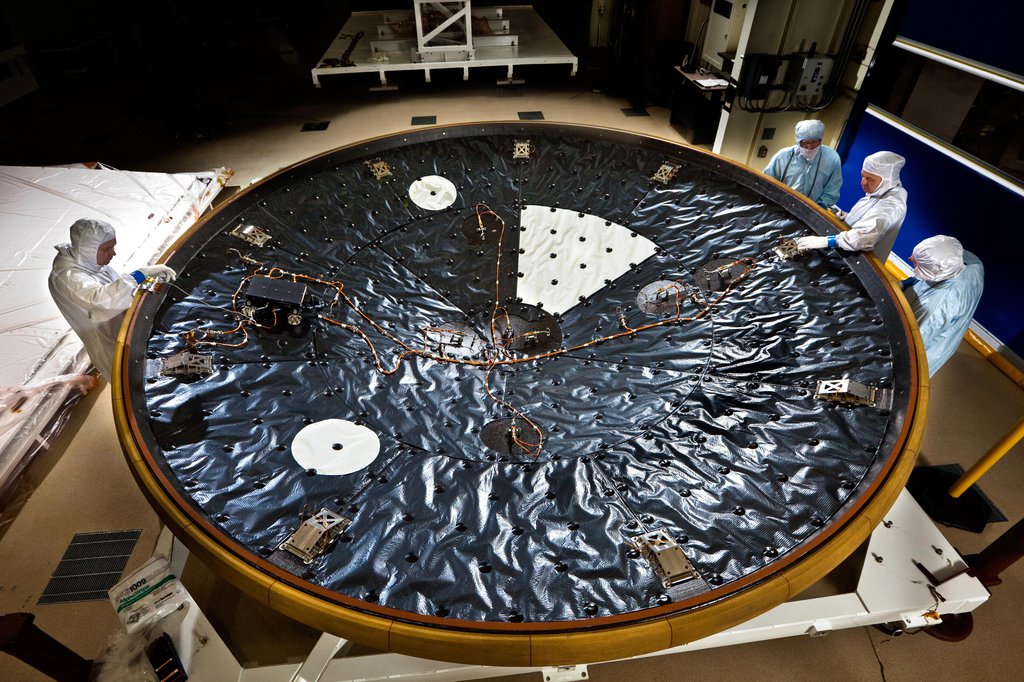 The heat shield for NASA's Mars Science Laboratory is the largest ever built for a planetary mission.

This image shows the heat shield being prepared at Lockheed Martin Space Systems, Denver, in April 2011. The heat shield was delivered to NASA Kennedy Space Center, Fla., on May 12, 2011, together with the mission's back shell and cruise stage. The heat shield and back shell, which together form the spacecraft's areoshell, have a diameter of 4.5 meters (nearly 15 feet).

Mars Science Laboratory will launch in late 2011. The mission's rover, Curiosity, will land on Mars in August 2012. It will study whether an intriguing area of Mars has offered environmental conditions favorable for supporting microbial life and for preserving evidence of whether life existed there.

The aeroshell will encapsulate and protect Curiosity from intense heat and friction generated during descent through the Martian atmosphere.

Technicians in the photo are installing electronics of an instrument for collecting data about temperature and pressure during descent through the atmosphere. This instrument is the Mars Science Laboratory Entry, Descent and Landing Instrument (MEDLI). It was developed by NASA's Langley Research Center, Hampton, Va., in partnership with NASA's Ames Research Center, Moffett Field, Calif.

The white area near the center of the heat shield will serve for calibration of the mission's Mars Descent Imager as the heat shield drops away from the rover during descent. The camera will then record a high-definition color video of the ground until moments after touch down.