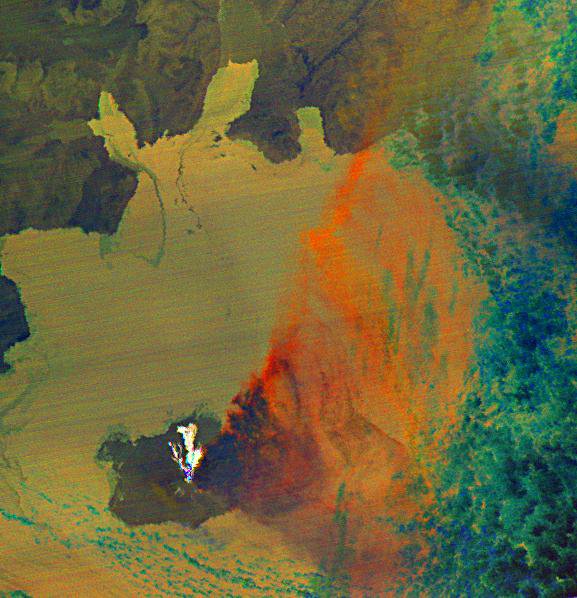 Since last spring, the U.S. Geological Survey's Alaska Volcano Observatory (AVO) has detected increasing volcanic unrest at Augustine Volcano in Cook Inlet, Alaska near Anchorage. Based on all available monitoring data, AVO regards that an eruption similar to 1976 and 1986 is the most probable outcome. During January, activity has been episodic, and characterized by emission of steam and ash plumes, rising to altitudes in excess of 9,000 m (30,000 ft), and posing hazards to aircraft in the vicinity. In the last week, volcanic flows have been seen on the volcano's flanks. An ASTER thermal image was acquired at night at 22:50 AST on January 31, 2006, during an eruptive phase of Augustine. The image shows three volcanic flows down the north flank of Augustine as white (hot) areas. The eruption plume spreads out to the east in a cone shape: it appears dark blue over the summit because it is cold and water ice dominates the composition; further downwind a change to orange color indicates that the plume is thinning and the signal is dominated by the presence of ash.