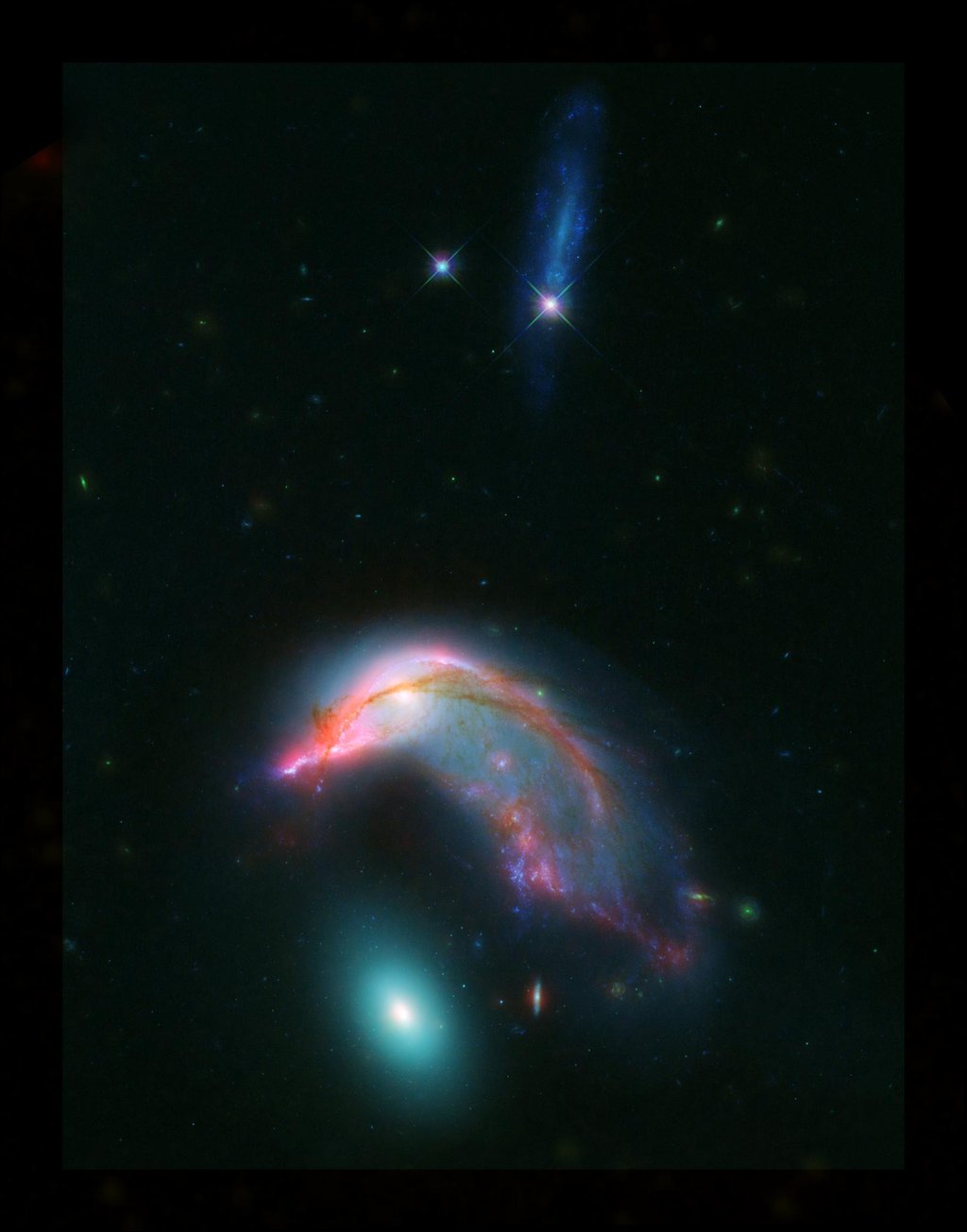 This image of distant interacting galaxies, known collectively as Arp 142, bears an uncanny resemblance to a penguin guarding an egg. Data from NASA's Spitzer and Hubble space telescopes have been combined to show these dramatic galaxies in light that spans the visible and infrared parts of the spectrum.

The "penguin" part of the pair, NGC 2936, was probably once a relatively normal-looking spiral galaxy, flattened like a pancake with smoothly symmetric spiral arms. Rich with newly-formed hot stars, seen in visible light from Hubble as bluish filaments, its shape has now been twisted and distorted as it responds to the gravitational tugs of its neighbor. Strands of gas mixed with dust stand out as red filaments detected at longer wavelengths of infrared light seen by Spitzer.

The "egg" of the pair, NGC 2937, by contrast, is nearly featureless. The distinctly different greenish glow of starlight tells the story of a population of much older stars. The absence of glowing red dust features informs us that it has long since lost its reservoir of gas and dust from which new stars can form. While this galaxy is certainly reacting to the presence of its neighbor, its smooth distribution of stars obscures any obvious distortions of its shape.

Eventually these two galaxies will merge to form a single object, with their two populations of stars, gas and dust intermingling. This kind of merger was likely a significant step in the history of most large galaxies we see around us in the nearby universe, including our own Milky Way.

At a distance of about 23 million light-years, these two galaxies are roughly 10 times farther away than our nearest major galactic neighbor, the Andromeda galaxy. The blue streak at the top of the image is an unrelated background galaxy that is farther away than Arp 142.

Combining light from across the visible and infrared spectrums helps astronomers piece together the complex story of the life cycles of galaxies. While this image required data from both the Spitzer and Hubble telescopes to cover this range of light, NASA's upcoming James Webb Space Telescope will be able to see all of these wavelengths of light, and with dramatically better clarity.