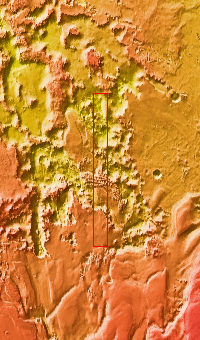 Today's VIS image shows part of Angustus Labyrinthus. Angustus Labyrinthus is a unique region near the south polar cap. In the center of this image squares formed by intersecting ridges are visible. The feature earned the informal name of the Inca City when it was discovered in Mariner 9 images in 1972.The linear ridges are believed to have formed by volcanic and tectonic forces, where magma filled fractures in the subsurface and then erosion revealed the magmatic material.