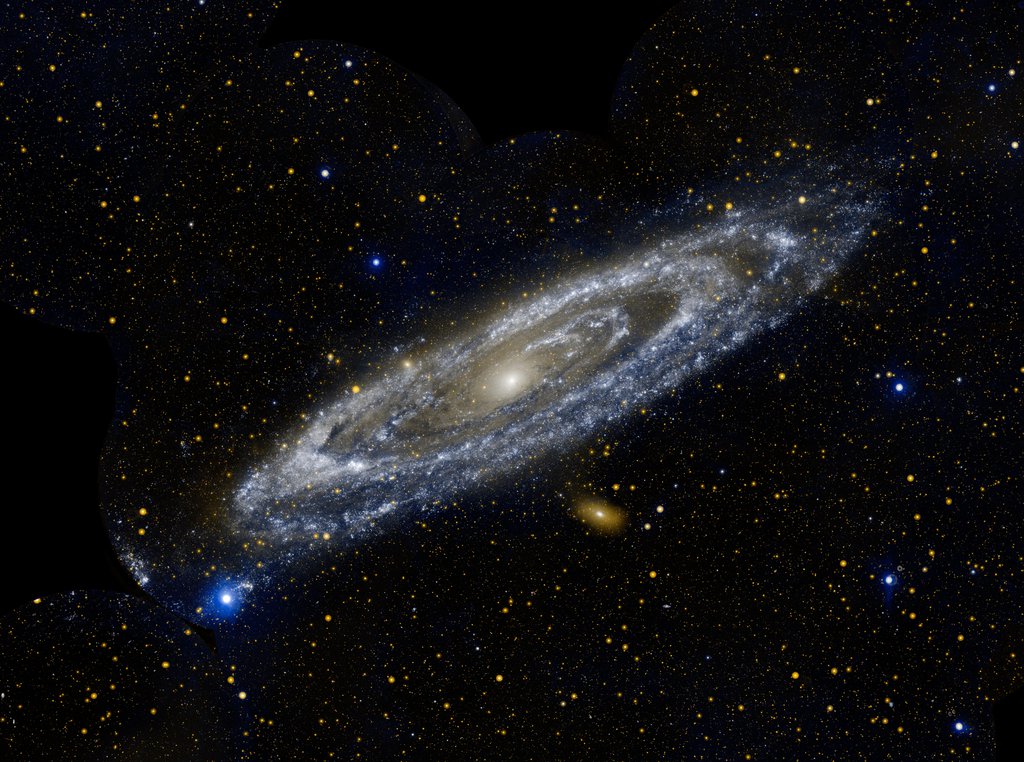 Hot stars burn brightly in this new image from NASA's Galaxy Evolution Explorer, showing the ultraviolet side of a familiar face.

At approximately 2.5 million light-years away, the Andromeda galaxy, or M31, is our Milky Way's largest galactic neighbor. The entire galaxy spans 260,000 light-years across -- a distance so large, it took 11 different image segments stitched together to produce this view of the galaxy next door.

The bands of blue-white making up the galaxy's striking rings are neighborhoods that harbor hot, young, massive stars. Dark blue-grey lanes of cooler dust show up starkly against these bright rings, tracing the regions where star formation is currently taking place in dense cloudy cocoons. Eventually, these dusty lanes will be blown away by strong stellar winds, as the forming stars ignite nuclear fusion in their cores. Meanwhile, the central orange-white ball reveals a congregation of cooler, old stars that formed long ago.

When observed in visible light, Andromeda's rings look more like spiral arms. The ultraviolet view shows that these arms more closely resemble the ring-like structure previously observed in infrared wavelengths with NASA's Spitzer Space Telescope. Astronomers using Spitzer interpreted these rings as evidence that the galaxy was involved in a direct collision with its neighbor, M32, more than 200 million years ago.

Andromeda is so bright and close to us that it is one of only ten galaxies that can be spotted from Earth with the naked eye. This view is two-color composite, where blue represents far-ultraviolet light, and orange is near-ultraviolet light.