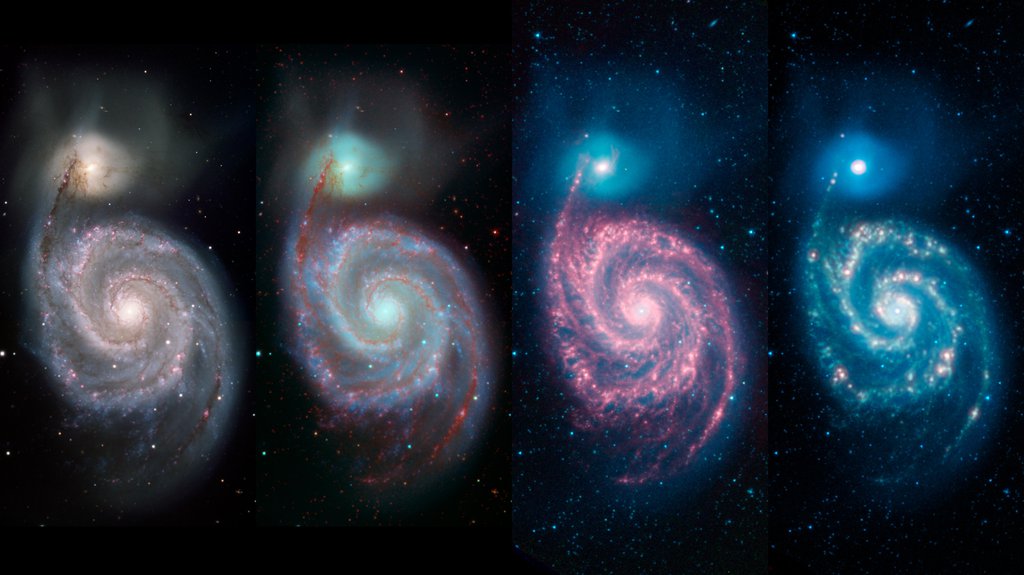 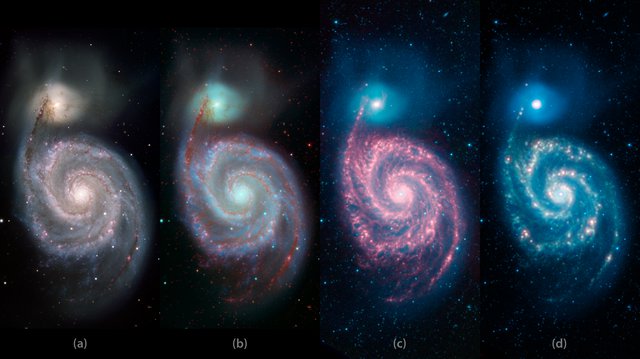 These four panels show the Whirlpool galaxy — which is actually a pair of galaxies also known as Messier 51 and NGC 5194/5195 — and how different wavelengths of light can reveal different features of a cosmic object. Located approximately 23 million light-years away, it resides in the constellation Canes Venatici.

The left image (a) shows the galaxy in visible light, from the Kitt Peak National Observatory 2.1-meter (6.8-foot) telescope and shows light at 0.4 microns (blue) and 0.7 microns (green). The next image (b) combines two visible-light wavelengths (in blue and green) and infrared light (in red). The infrared was captured by NASA's Spitzer Space Telescope and emphasizes how the dark dust veins that block our view in visible light begin to light up at these longer, infrared wavelengths.

The right two panels are composed entirely of Spitzer data. In the middle-right panel (c), we see three wavelengths of infrared light: 3.6 microns (shown in blue), 4.5 microns (green) and 8 microns (red). The blended light from the billions of stars in the Whirlpool is brightest at the shorter infrared wavelengths and appear as as a blue haze. The individual blue dots across the image are mostly nearby stars and a few distant galaxies. Red features (at 8 microns) show us dust composed mostly of carbon that is illuminated by the stars in the galaxy.

All of the data shown here were released as part of the Spitzer Infrared Nearby Galaxies Survey (SINGS) project, captured during Spitzer's cryogenic and warm missions.