A Shocking Surprise in Stephan's Quintet 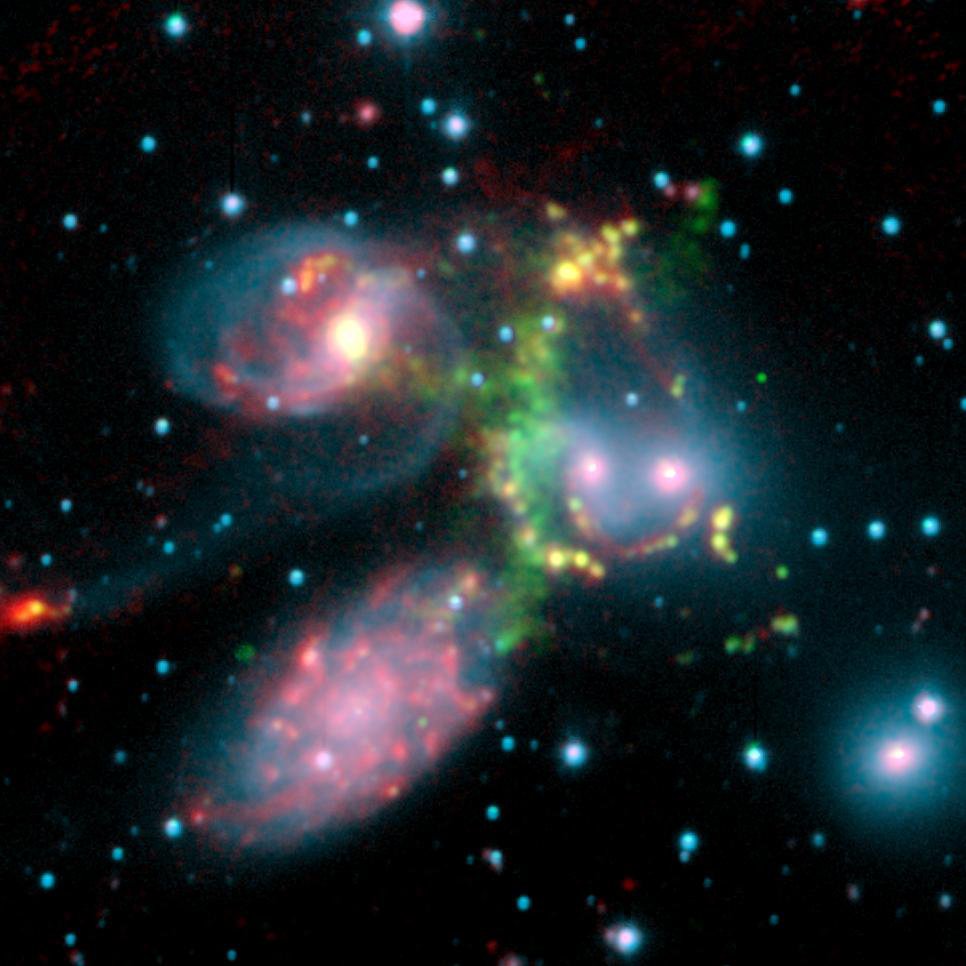 This false-color composite image of the Stephan's Quintet galaxy cluster clearly shows one of the largest shock waves ever seen (green arc). The wave was produced by one galaxy falling toward another at speeds of more than one million miles per hour. The image is made up of data from NASA's Spitzer Space Telescope and a ground-based telescope in Spain.

Four of the five galaxies in this picture are involved in a violent collision, which has already stripped most of the hydrogen gas from the interiors of the galaxies. The centers of the galaxies appear as bright yellow-pink knots inside a blue haze of stars, and the galaxy producing all the turmoil, NGC7318b, is the left of two small bright regions in the middle right of the image. One galaxy, the large spiral at the bottom left of the image, is a foreground object and is not associated with the cluster.

The titanic shock wave, larger than our own Milky Way galaxy, was detected by the ground-based telescope using visible-light wavelengths. It consists of hot hydrogen gas. As NGC7318b collides with gas spread throughout the cluster, atoms of hydrogen are heated in the shock wave, producing the green glow.

Spitzer pointed its infrared spectrograph at the peak of this shock wave (middle of green glow) to learn more about its inner workings. This instrument breaks light apart into its basic components. Data from the instrument are referred to as spectra and are displayed as curving lines that indicate the amount of light coming at each specific wavelength.

The Spitzer spectrum showed a strong infrared signature for incredibly turbulent gas made up of hydrogen molecules. This gas is caused when atoms of hydrogen rapidly pair-up to form molecules in the wake of the shock wave. Molecular hydrogen, unlike atomic hydrogen, gives off most of its energy through vibrations that emit in the infrared.

This highly disturbed gas is the most turbulent molecular hydrogen ever seen. Astronomers were surprised not only by the turbulence of the gas, but by the incredible strength of the emission. The reason the molecular hydrogen emission is so powerful is not yet completely understood.

Stephan's Quintet is located 300 million light-years away in the Pegasus constellation.