A Picture Postcard From Curiosity's Navcams 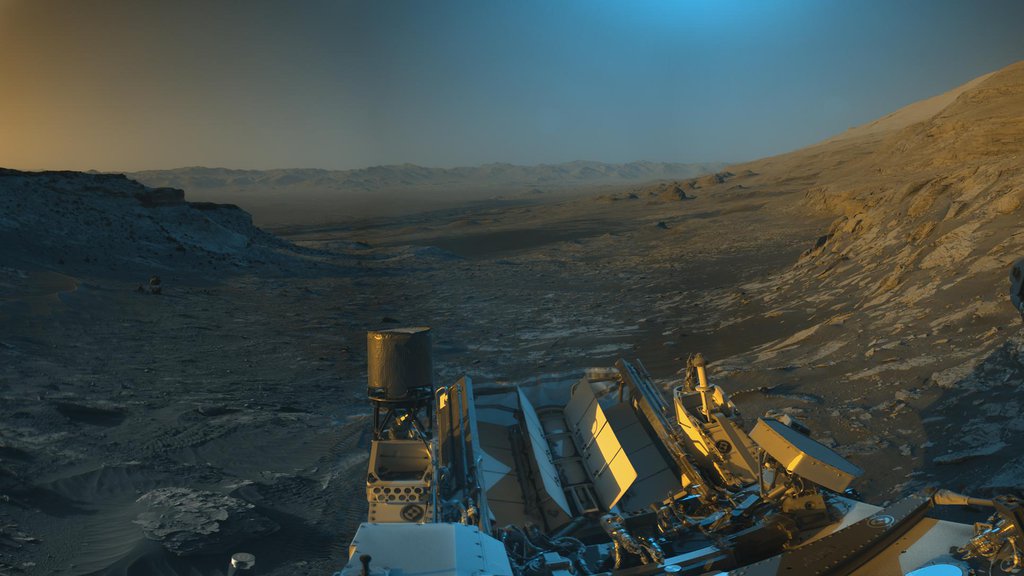 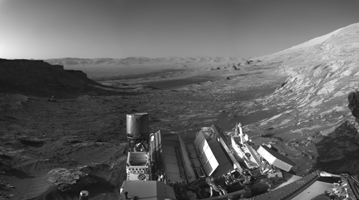 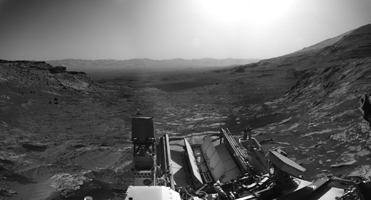 NASA's Curiosity Mars rover used its black-and-white navigation cameras to capture panoramas of this scene at two times of day. Blue, orange, and green color was added to a combination of both panoramas for an artistic interpretation of the scene.

On Nov. 16, 2021 (the 3,299th Martian day, or sol, of the mission), engineers commanded Curiosity to take two sets of mosaics, or composite images, capturing the scene at 8:30 a.m. and again at 4:10 p.m. local Mars time. The two times of day provided contrasting lighting conditions that brought out a variety of unique landscape details. They combined the two scenes in an artistic re-creation that includes images from the morning scene in blue, the afternoon scene in orange, and a combination of both in green.

At the center of the image is the view back down Mount Sharp, the 3-mile-tall (5-kilometer-tall) mountain that Curiosity has been driving up since 2014. Rounded hills can be seen in the distance at center-right; Curiosity got a closer view of these back in July, when the rover started to see intriguing changes in the landscape. A field of sand ripples known as the "Sands of Forvie" stretches a quarter- to a half-mile (400 to 800 meters) away.

At the far right of the panorama is the craggy "Rafael Navarro Mountain," named after a Curiosity team scientist who passed away earlier this year. Poking up behind it is the upper part of Mount Sharp, far above the area Curiosity is exploring. Mount Sharp lies inside Gale Crater, a 96-mile-wide (154-kilometer-wide) basin formed by an ancient impact; Gale Crater's distant rim stands 7,500 feet tall (2.3 kilometers), and is visible on the horizon about 18 to 25 miles away (30 to 40 kilometers).

Mars Science Laboratory is a project of NASA's Science Mission Directorate. The mission is managed by JPL. Curiosity and its navigation cameras were designed, developed and assembled at JPL, a division of the California Institute of Technology in Pasadena.